Sefirot/Emanations in the Matrix Worlds

As mentioned previously, there are two ‘templates’ that form the framework to the Matrix, Matrix Reloaded, Matrix Revolutions, and the upcoming The Matrix Resurrections. These are the two templates that kabbalah teaches are the structure of all reality. In this article, we discuss the template of ten divine emanations called Sefirot.

To review, the first of these is that of “five levels.” In our previous articles we gave the two most critical examples of this:

We’re now going to look at the second major template – a more complex one.

The Template of Ten Sefirot

Our next template is one of ten ’emanations.’ The kabbalistic term for these is ‘sefirot’ (SEF-eh-rote, singular: ‘sefirah’). The origin of this term has to do with expression and communication. Keep that in mind going forward as it will help explain the function of the characters.

This last point is important as it relates to each human character in the Matrix movies.

Further, what we can learn through them and their interactions in the movies, we can then turn back around and apply to our own lives. (Matrix4Humans = Matrix FOR humans!)

Note: We use the terms; sefirot, emanations, and attributes, synonymously throughout Matrix4Humans. The concepts introduced here are developed in detail in the other articles in the Matrix4Humans Knowledge Base.

The ‘Stuff’ We’re Made Of

As mentioned, every human being has all ten emanations within them. We may call these, “personal characteristics or attributes.”

Though each human has the whole “set of ten,” certain attributes are more or less dominant from one person to another – or from one situation to another. Their intensity, and how they interact, give each of us our individual personality traits and intellectual and emotional strengths.

The same applies to the characters in the Matrix trilogy, and is a main focus in the upcoming Character Profiles and subsequent articles including our latest on The Matrix Resurrections.

First concept: Each sefirah/emanation is both a vessel and the energy within it.

For example, the energy called ‘Gevurah’ relates to the aspect of ‘judgment.’ It is also the vessel or channel through which judgment comes. How we consider ‘judgment’ depends on the application.

In and of itself, this emanation is ‘neutral,’ as are all of the others. For instance, we may consider someone who makes wise decisions as having “good judgment.” However, in some cases, it can reflect a form of accusation or “passing judgment,” like in a court setting.

With regard to this particular attribute manifesting in an ‘accusatory’ sense, we look to Agent Smith, who displays this and carries it out. (Think about all the things he said to Morpheus about the virus-like nature of humans.)

As we will see, even this aspect of Gevurah is ultimately for the good in the Matrix story – and in life. (As we expect will be revealed in The Matrix Resurrections!)

We’re starting with a basic overview of the ten sefirot. As stated, these emanations are all present within the different worlds of existence. How they function within each of those worlds differs. 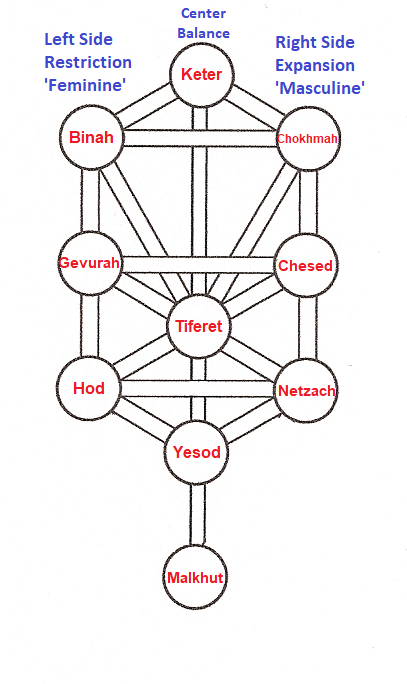 The sefirot are usually laid out in a diagram like the one here. This is called the Tree of Life in kabbalah. It shows us things about how the emanations function and interrelate.

We will be utilizing this diagram to explain a number of concepts and attributes of the characters going forward.

The Tree of Life diagram places the ten sefirot on three columns.

The right side represents functions such as ‘expansion,’ being ‘proactive’, and using imagination.

The left is the opposite side, one of ‘restriction,’ being ‘reactive’ and critical analysis.

Characters in the movies, at varying times, exhibit behaviors that may be more related to the right or to the left.

The left and right sides in this context, carry with them the ideas of ‘feminine’ (left) and ‘masculine’ (right), but not in the sense of gender.

(Note: There is a different masculine-feminine dynamic when discussing these in their ‘vertical’ array as shown below.)

The middle column is that of ‘balance’ between the two sides. This is important as the attributes on the right or the left, if “left to themselves,” can be counterproductive and even destructive. (i.e., the ‘unplugged’ Smith, which we discuss later.)

This resolving of opposites is central to understanding and advancing upon our own path in this world. It is reflected in The Matrix Resurrections in terms of a “binary” view of reality in need of rectification.

We will next explain a bit about these emanations in a ‘descending’ (vertical) order and place them in several groupings. The terms are given in their original language. Note that direct translations don’t always carry over well into English.

Second Concept: The ‘Top 3’ are the ‘Brains’

The first (‘top’) three sefirot are seen as being ‘outside’ of our day-to-day matters. They are collectively called the divine ‘intellects’ or ‘brains’ (Mochin). You can also think of them as “overarching principles” above the lower seven emanations.

In the Matrix, these correspond to the three key entities ‘outside’ of the Matrix world: the Source, the Architect and the Oracle. These are not human entities and are very singular in terms of what they represent. 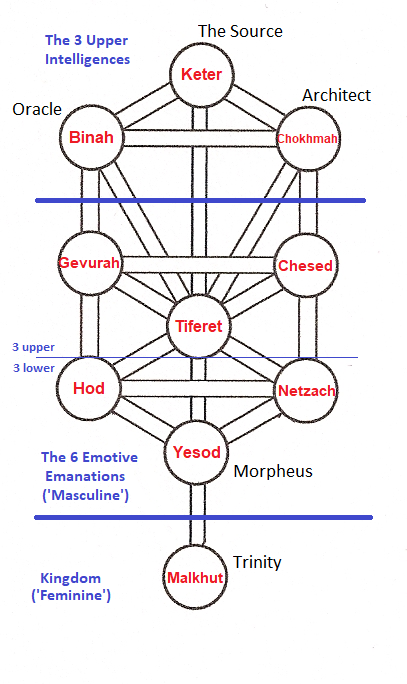 To recap, the above three sefirot are not directly involved in our day-to-day reality, or that of the Matrix characters. The exception to this is that humans freed from the Matrix connect (one or more times) with the Oracle. She is the ‘nearest’ to them of the three upper emanations.

Thus, the Oracle (as Binah) is seen as the “entry point” to the three highest sefirot when viewing from the “bottom-up.” Binah is also called the ‘mother’ to the lower emanations.

Now it gets interesting. The next six emanations, though having their own distinct characteristics, also function as a ‘unit.’ You can think of these as six areas we need to repair in order to improve and move forward.

They are called “emotive” attributes, but this is not ’emotion’ as typically thought of.

In the Matrix, especially with Neo, the repair of these six, is especially associated with the means of returning to the Source. (Working up the path of the One.) This is the aspect of knowing (connecting to) one’s “true self,” as we discuss in our article on the Temet Nosce sign in the Oracle’s apartment.

The fact that there are six in this grouping also connects to Neo being the sixth and final version of “the One,” which we discuss in a later post.

This group of six is further broken down into two sets, which function together, connecting above and below:

Let’s look at each subset with some Matrix examples:

Upper 3 – Connecting to the Higher Intellect

Looking back at the Tree of Life diagram, you can see that each of these sets of three has aspects of a proactive side, reactive side and a center of balance, as mentioned earlier. 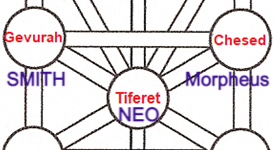 Neo is a harmony of Smith and Morpheus

Lower 3 – Connecting to the World of Action

The next three sefirot mirror the set above on a one-to-one basis but relate to the ‘application’ of their functions. The direct translations of these words don’t carry over well, so we’re adding more descriptive terms.

Everything That Has a Beginning Has an End

When considering the seven lower emanations and the dynamics involved, the group of six above are seen as ‘masculine’ and more specifically, the concepts of ‘son’ or ‘bridegroom,’ depending on the context.

Malkhut, ‘below,’ is feminine and the ‘bride’ (or in some contexts, the ‘daughter.’)

There’s another important relationship between the templates of the Worlds of Existence and the template of the sefirot. Although each World has the complete set of 10 sefirot within it, there is another correlation between certain emanations and worlds:

Thus, as a final recap, we have:

There’s No Going Back!

This completes our “crash course” on The Matrix and Kabbalah. (Sorry, no diploma – yet.) All of the topics mentioned thus far will be further explained as we venture into our Character Profiles. What’s important to know is that the template of the sefirot is primarily a system of self-improvement. This is true for us as well as the characters in the Matrix.

It’s best to continue with these posts in the order presented, as we try to add “precept upon precept.” Simply follow the arrow buttons on the sides of the screen if they appear in your browser.

There’s a lot here, and we’re continually adding to it. You will never look at the Matrix movies the same after this. Read some of our Testimonials to see what others have said. Send one to us if you like!

You still have time before we get to The Matrix Resurrections on 12.22.21.

The Matrix Template 2 – Levels of the SoulArticles, Kabbalah, Soul