Welcome to Our Kabbalah Crash Course

If you missed the intro page, CLICK HERE to read it first, as it has some good information.

Yes, this is a course of learning – a fun one – unlike anything you’ve ever encountered. We’re taking a lot of information, spanning centuries, and filtering it through the Matrix films. This will not only radically change your view of the Matrix, it will also, “free your mind,” regarding much more about life.

As mentioned, Lana and Lily Wachowski both have knowledge of kabbalah. In this Knowledge Base, we will show how this likely impacted everything in the Matrix story. Before getting into the character profiles and ideas from the Matrix movies, we’re presenting some key concepts in the form of ‘templates.’ Kabbalah is very structured and logical, and diagrams are an effective way to convey ideas.

There is a lot packed into this 3-post “Kabbalah Crash Course.” Take your time and please feel free to reach out to us at info@matrix4humans.com with any comments, questions or suggestions.

We recommend following all of the articles in the Knowledge Base in the sequence presented as new concepts connect back to previous ones we discuss.

The Two Main Templates in Kabbalah

How’s this for starters?

There are two templates that provide the framework for everything there is to know about existence.

They apply to The Matrix as follows:

In this section, we deal with the structure and five worlds/levels. Metaphorically, these can be viewed from the “top-down” or “bottom-up.” As we will show, these relate in a specific way to the Matrix, especially the “Path of the One.”

In the Matrix movies, these are:

In our Matrix Resurrections articles in the Knowledge Base, we will introduce how the films also follow a kabbalistic timeline that relates to our own world.

The Structure of Creation and the Matrix

Kabbalistic concepts are found through every religion, philosophy, science, the arts, etc. The Bible is a primary text of their expression. We will first look at a few important ideas expressed there.

Relating to the structure of the Matrix, our first template is found in the first words of its opening sentence:

Seems pretty straightforward, does it not? You have a Creator and a ‘creation.’ Kabbalah takes this further, showing that there are other aspects to both.

The Matrix is Our ‘Physical’ World

To facilitate understanding, we’re starting from the “bottom-up” as the upper worlds are increasingly complex.

We will address the three lowest worlds together, as collectively they make up what is known as ‘creation.’

They are called (with their kabbalistic Hebrew terms, and Matrix connection, next to them):

Beginning “at the bottom” (Asiyah) we have the ‘physical’ world we live in. This includes all we experience with our senses, as well as everything revealed at the end of a telescope or a microscope. It also includes the dimensions of time and space.

The other two worlds within creation (and beyond) are initially hidden from us. Thus, our world is called the “World of Concealment.”

This is what the Matrix world corresponds to throughout the three movies. Humanity is unaware that there are programs, the Oracle, etc.

In each case, when we “look around us,” we are fooled into thinking, this is all there is to ‘reality,’ This is the first correlation to understand.

As Morpheus says to Neo,

“It is the world that has been pulled over your eyes.”

There’s More Than Meets the Eye

The next world (Yetzirah) is an “in-between” one that functions to connect our physical existence to the hidden/upper realms. This middle world is also called the ‘angelic’ world.

The word for angel in the Biblical Hebrew text, malach, means ‘messenger.’ They are the go-between entities that convey information between below and above, and also initiate action, down to the smallest degree.

In the Matrix story, this ‘middle’ world relates to the programs which keep the Matrix functioning properly. The Oracle explains this to Neo in the park bench scene in The Matrix Reloaded. (More on all of this in another article.)

Finally, we have the ‘uppermost’ world (Beriah) within creation which is purely spiritual existence. This is what people call ‘heaven’ or “the heavenly realm” in different traditions. (Remember, ‘heaven’ is not the universe, planets, etc. All of that was part of the lowest ‘physical’ realm discussed above.)

This is also called the world of what is called ‘forces’ or ‘powers’ in kabbalah. What emanates from here serves the purpose of directing everything in the two worlds below – the program world and the Matrix.

This higher world “within creation,” corresponds to that of the Oracle, with which the ‘freed’ humans make contact. As we will see, she is ultimately the connection between the Matrix and the Source.

Up and Down We Go 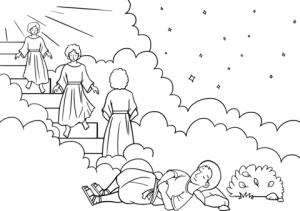 The above framework is found in the account of a dream that the Biblical character Jacob had. (This is found in Genesis chapter 28) In it, he saw himself in the lower, earthly world, with angels going up and down a ladder that connected to the spiritual heavens. He also saw some “image of God” above those three levels. (We get to that shortly.)

This idea of a “connection” between “below and above,” (between the Matrix world and the Source), is fundamental to the entire “Path of the One” and is discussed throughout the Knowledge Base.

To recap, the entirety of what is referred to as, ‘creation,’ is considered to be made up of three ‘worlds’ as follows:

Before continuing, have a peek at the diagram below. Here we show the five levels, as they relate to the Matrix, including the critical entity Neo meets (which we also explain more of later). 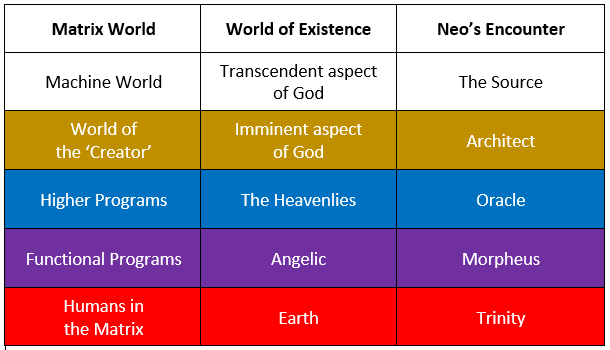 These worlds, in order, are actually depicted in the very beginning of Matrix Revolutions, as we show in our Knowledge Base. We have a few steps before we get to that!

Returning to the Genesis verse.

The last word, ‘created,’ marks the start of the three worlds of creation we just mentioned.  Prior to that point, all that ‘existed’ was what we can conceive of as ‘God’ in terms of the ‘Creator.’

Those first words, before the word ‘created,’ represent a world of existence that is “beyond/before creation.” It is called ‘Atzilut’ meaning ‘nearness’ to the Source. It is called the world of ’emanation.’

This world relates to the “Image of God” that Jacob saw “above heaven” in his dream.

Note that the term and idea of ‘image’ (found in Genesis 1:27) is not ‘God’ in essence. It is the level at which people relate to ‘God.’ It is the idea of God as immanent or “within Existence but outside of Creation itself.”

This world of emanation is also called nearness, as in “near to the Source.”

As mentioned, this world is very different than the three within Creation. It is a unity of all the things that manifest as “separate things” within creation:

In the Matrix story, this is the world of the Architect. We see this in his fixation on ‘perfection,’ as he mentioned to Neo, and the purpose of “balancing the equation” as the Oracle mentioned.

The Architect is beyond the Matrix and program worlds, and that of the Oracle. He calls himself ‘father’ and the creator,’ yet he himself was created by the machines. (We address this in his Character Profile.)

When compared to the text from Genesis 1, shown above, the Architect is the concept of “God/Creator,” within existence that we can somehow “relate to.” But there is much more to ‘God’ than what we can comprehend.

This brings us to our final destination – the ‘Source.’

The Hidden World That is Not a World

The world beyond that of Existence is far more sublime, so much so that it is not usually called a ‘world’ within kabbalah. This is considered “pre-existence.”

This world relates to what is considered the transcendent aspect of God.

One way to reference this is a perfect ‘singularity.’ We cannot truly ‘describe’ it in any way as our own thoughts can only relate to things “within existence.”

We do our best to carefully use terms that can give us some basic ideas, based on the received traditions in kabbalah.

This distinction between the immanent and transcendent aspects of God helps in understanding the Matrix properly. Whereas the Architect is ‘creator’ relating to all programs and the Matrix, this higher reality relates to “the Source.”

This is the ‘Creator’ outside the existence of the Architect other programs and the Matrix, that none of the characters could relate to from within their existence. Not even the Architect properly understands the Source.

Click here for an excellent short video on these two aspects of “the Creator.” If some of the language is confusing, don’t worry – just go through this Knowledge Base then come back to it.

The path from pure singularity, through the worlds of existence/creation, down to our physical reality, is one of a series of ‘restrictions’ (or ‘constrictions’) of the original ‘light’ of the Creator.

The term for such restriction is tsimtsum (also spelled ‘tzimtzum’). It is one of the most critical concepts in kabbalah.

Putting it another way, tsimtsum is the mechanism that connects the ‘infinite God’ with finite existence, extending through all of its ‘descending’ worlds of existence.

As we will discuss later, the tsimtsum and ‘change’ from the level of singularity/pre-existence to the first level existence (before ‘creation’) is the first and greatest tsimtsum. (As we are going from “no-thing-ness to some-thing.”)

All subsequent changes “within existence,” are like ripples in a pond, after the rock was thrown into the water. Hold that thought for now as this impacts how we view reality – as well as the essence of the Matrix story. (It’s what is behind the systemic anomaly the Architect mentions.)

The process of constriction/tsimtsum also applies to our path ‘back’ to the Creator. Every spiritual advancement a person attains is preceded by some sort of tsimtsum. False views of reality must be ‘restricted’ in order to allow room for the truth.

Tsimtsum is the force behind Neo’s advancement on the “path of the One.”

The Construct of the Matrix Reality

OK, so here’s a summary of our first template as related to the chart above. It shows how the five worlds correlate to the Matrix and what Neo’s main ‘connection’ is at each level.

We’re going from the top-down this time:

Another Template of Five in Kabbalah

So far so good. We are one-third the way through our “crash course!”

This first template gave us a view of the basic construct of the Matrix movies as they relate to kabbalistic teachings. It sets the stage for what follows. Once you understand this, the rest falls into place.

Before moving to the second template, we’re going to take a look at another application of the current one. This next one is called the five dimensions or levels of the soul. It relates very closely to the five worlds of existence we just discussed.

It is also specific to understanding Neo’s advancement through the movies on the “Path of the One” and where all of this is going in The Matrix Resurrections.

NOTE: There are arrow buttons on the sides of the page (appearing in MOST browsers) to move through the Knowledge Base. Articles are in an order designed to be helpful, beginning with a few Introductory ones on critical main concepts.

The Matrix: Time To Let the Déjà Vu Cat Out of the BagArticles, Kabbalah, The Matrix

The Matrix Template 2 – Levels of the SoulArticles, Kabbalah, Soul