The character known simply as “Kid” (played by Clayton Watson) in The Matrix Revolutions, particularly exemplifies the attribute of Netzach. On an interpersonal level, Netzach is what gives a person “the nerve” to go up to someone to introduce themselves, ask how they can help, give information, etc.

Kid has no problem doing that. He’s going to be there when you need him too, ready to jump into the fray.

In such a situation,  the “counter sefirot” of Hod (on the left, across from Netzach) is the ability to calculate when it is appropriate to speak/act, what to say/do, how to say/do it, and at times, when to “get lost.”

Someone whose Netzach is not in balance with Hod could have “boundary issues,” such as getting into someone’s personal space, or not restraining their speech. (i.e., TMI – “too much info!”)

This is Kid’s primary ‘problem’ with those around him. He means well, but he can be obnoxious.

The Plan in Action 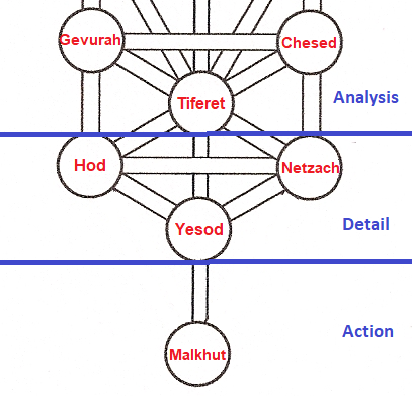 In kabbalah, Netzach and Hod are compared to the legs of a person, which “get you where you need to go.”

They also work in unison more than the arms do on a person. Most people tend to favor one arm/hand over the other.

If you think of them working along with the Sefirot above them, you can view the “saving of the dock” scene as follows, with Kid acting in the role of Netzach and beyond.

Analysis (based on intellect above)

Detail (putting the idea into a specific plan of/for action)

This entire process often goes on in our lives without us realizing it. Another take on this is Stephen Covey’s book, “The 7 Habits of Highly Effective People,” which mirrors the seven lower emanations.

Persephone: The Other Side of Trinity in the MatrixArticles, Character Profiles, Persephone