In their short appearance at the beginning of The Matrix Revolutions, Rama Kandra (played by Bernard White) and Kamala (played by Tharini Mudaliar) provide an example of how Netzach and Hod function together. These two sefirot are called the “wings of Yesod” as their ‘product’ is harmonized in the central emanation of Yesod. In their case, this results in Sati.

As a ‘recycling operations’ manager, Rama Kandra is in a perpetual state (Netzach) providing for the Matrix. Kamala is an ‘interactive’ program, exhibiting the ‘reverberative’ aspect of Hod in ‘creating’ a response.  Their ‘jobs’ may seem trivial with regard to the Matrix story, but as we will show later, they relate directly to the coming fourth movie with regard to their daughter.

As we discussed in our introductory articles, Netzach and Hod reflect the higher emanations of Chokmah and Binah in the lower realms. The latter two are in the form of the Architect and Oracle – the co-creators.  Thus Sati is the synergy (Yesod) of these two creative forces, brought into the Matrix.

Rama Kndra and Kamala “cut a deal” with the Merovingian who operates at Yesod in a defective, ego-driven manner. The Merovingian controls the ”train station,” which is the aspect of connection at Yesod. Please note the partial diagram below.

This is not to say that what they did was a ‘bad’ thing. In fact, if you listen closely to Rama Kandra’s conversation with Neo, he states that he consulted with the Oracle prior to going to the Merovingian.

The Oracle was in on things from the very beginning. Remember, she is only interested in the future – the fulfillment of the prophecy attributed to her. Getting Sati into the Matrix was part of the plan from the onset. As Morpheus would say, “What happened, happened and couldn’t have happened any other way.”

What Sati brings with her, is necessary for the humans to escape their entrapment. This is highly significant toward what is to come and is discussed in our Matrix 4 articles. There is a response required on the part of the humans, however. 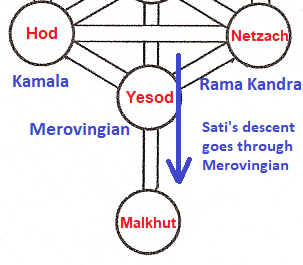 Rama Kandra’s explanation of love as ‘connection,’ is at a higher level of understanding.

From the conversation in the Train Station:

Rama-Kandra: “…The answer is simple. I love my daughter very much. I find her to be the most beautiful thing I’ve ever seen. But where we are from, that is not enough. Every program that is created must have a purpose; if it does not, it is deleted. I went to the Frenchman to save my daughter. … You do not understand?”

Rama-Kandra: “No, it is a word. What matters is the connection the word implies.”

Here, he acts in the role of ‘Father’ to the ‘daughter,’ an aspect of the Shekinah. The Oracle and Trinity are the ‘mother’ and ‘bride’ aspects respectively.

Bane: Descent and Ascent of Judgment in the MatrixArticles, Bane, Character Profiles

Niobe: Synergy Within the Middle Path of the MatrixArticles, Character Profiles, Niobe