Persephone’s “bathroom rant,” about her husband, the Merovingian, (played by Lambert Wilson) begs the question, “HOW was he once like Neo?”  What do we know about this guy?

Let’s present him in a ‘good’ light first:

The Merovingian himself hints of his antiquity when speaking to Neo.

“I have survived your predecessors, and I will survive you!“

An entrepreneur with Business Acumen

He’s a veteran of the Matrix world with savvy business skills;

In The Matrix Reloaded, the Merovingian describes his occupation to Neo, Morpheus and Trinity:

The Merovingian’s “personal references” are not so great, however:

“… a very dangerous program” (The Oracle)

The Merovingian and the 101 Connection With Neo

There are a number of characters who play a role of ‘antagonist’ in the Matrix films. Two of them are compared to Neo, but in different ways.

As we mentioned in our profile of Morpheus, without a proper moral compass, you cannot ascend up the “path of the One” very far.

Like Agent Smith, the Merovingian serves a specific function in bringing rectification to Neo and the Matrix. (See our article on the function of ‘barriers’.)

The Merovingian is a corruption of the characteristics of “the One.” Note the number 101 in his restaurant in the image above – the same as Neo’s apartment number.

Three of his defective attributes display themselves prominently: 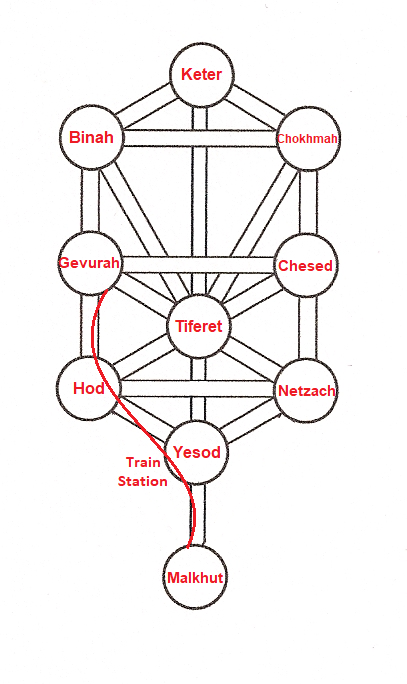 When in his restaurant, the Merovingian mentions eating and drinking, “for the sake of appearances.” He presents himself as a total egotist, considering himself ‘above’ others.

As he relates to Neo:

“‘Why’ is what separates us from them, you from me.”

This is a disfunction of Yesod, which is about synergy and helping others without desiring personal benefit.

The Merovingian’s ability to traffic information and programs (as Rama Kandra explained) also reflects Yesod. As discussed earlier, Yesod is the connection between Malkhut (the Matrix world and our ‘physical’ world) below, and everything beyond it.

Our profile of Morpheus discusses this and also how there is a part of this attribute that relates to pureness in sexuality, something the Merovingian fails at miserably. He considers his own deviancy as “a game” as he tells Persephone.

Just as the Oracle described Morpheus’ key function at Yesod by saying, “without him, we’re lost,” the Merovingian’s role at Yesod plays a pivotal role – one that will be revealed in The Matrix Resurrections.

The Merovingian also exhibits an unrectified attribute of Hod, which is the ability to process information correctly.

He states his view of reality as follows:

“You see there is only one constant. One universal. It is the only real truth. Causality. Action, reaction. Cause and effect.”

Though causality has its place, it is not the ‘final say’ in reality. The Merovingian does have an analytical nature, which derives from the left side (the side of Binah, the Oracle) as discussed.

We see this reflected when he challenges Neo, Morpheus, and Trinity:

“But this is not a reason, this is not a `why.’ The Keymaker himself, his very nature, is a means, it is not an end, and so, to look for him is to be looking for a means to do… what?

The Merovingian is blinded by his own ‘restriction’ – the very attribute that enables him to understand things. (He is similar to Smith as well as Commander Lock in this respect.)

As mentioned, without a connection to the central column of truth, his persepctive and energy evolves around himself and becomes corrupt.

The sefirah of Gevurah (judgment) is also related to power. This comes from the idea of constriction, much like a muscle constricts before being used in a ‘powerful’ manner.

As with all of the emanations, gevurah/power is neutral and can be applied for good (i.e., “inner strength”) or evil (self-serving manipulation/dominance of others).

The Oracle summed up the Merovingian’s desires in this manner:

“What do all men with power want? More power.”

Neo, Smith and the Merovingian all seek power, albeit for different reasons: 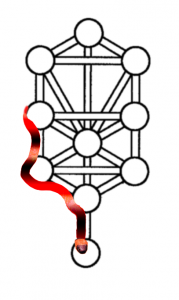 Merovingian as the Nachash

As the Merovingian wants ‘more power,’ this relates directly to his stated desire for “the eyes of the Oracle,“  a deep topic that we discuss in another article.

The Merovingian represents the concept of the ancient serpent – who once had “good qualities.” And just as the latter’s first encounter was with a woman, so will his final one be. Only this ‘woman’ isn’t exactly the human kind. We are speaking of Sati who will return.

There remains something called the “rectification of the serpent” in kabbalah (tikkun ha-nachash) that comes along with the final phase of humanity’s redemption.

Thus, the concept of the serpent relates directly to that of the Matrix world of concealment.

“In Kabbalah, the nachash is the embodiment of olam hadimyan—the “world of illusion.”
Primordial Serpent – the Incurable Atomist, Alexander I. Poltorak

(A search on this website for ‘Merovingian’ will reveal a number of articles.)

Smith: Not So Bad After All? Could This Be True?Articles, Character Profiles, Smith