The character Cypher (played by Joe Pantoliano) gives us several important traits to analyze, regarding a defect in Netzach.

The attribute of Netzach emanates from ‘faith,’ a product of the right side of the Tree of Life. Faith is rooted in Chokhmah/Wisdom, which relates to the world “beyond Creation,” (Atzilut), which is outside our capability of viewing, though we can ‘connect’ with it.

Netzach also works hand in hand with Hod on the left side of the Tree of Life. When these two attributes are in balance, a proper synthesized (Yesod) response is likely to follow.

One way to understand this pair is by comparing two well-known sayings:

Netzach says, “He who hesitates is lost.”

Hod responds, “Look before you leap.”

Netzach, in its perfect form, is that of perseverance, overcoming personal obstacles, and is immune to regret or doubt. When you truly have faith, and act in balance, proper actions and being pro-active come easy.

The ambition of Netzach, if isolated from the other emanations of faith and discipline, results in confusion, disenchantment and finally doubt.

This is heard in Cypher’s words, which steadily resonate with ‘doubt,’ from the very beginning of the first movie.

Such a perspective often seeks its own type of connection with others:

Trinity: Morpheus believes he is The One.

And again later with her:

Cypher: I just keep wondering, if Morpheus is so sure, why doesn’t he take him to see the Oracle?

And when he speaks with Neo:

Cypher: A little piece of advice. You see an agent, you do what we do. Run. You run your ass off. 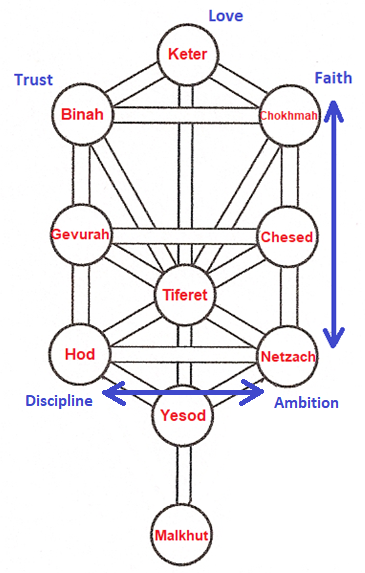 In kabbalah, the Biblical figure of Amalek, is associated with doubt. It is not the evil Amalek himself who suffered from this. Rather, he would be empowered, when doubt prevailed on the part of the people.

An example given is when the Israelites engaged the army of Amalek in an epic battle. The former did well when they had faith. When they did not, Amalek would gain an advantage.

The following text, from an analysis of the Biblical story,  mentions how doubt crept in among the people and the cause and effect relationship with Amalek:

The Amalekites were ever a strap of chastisement for Israel. You find that as soon as they said, “Is the Lord among us?,” came Amalek.
Midrash Rabbah – Numbers 19:20

It’s of interest that the gematria (numerical value) of Amalek is 240, which is exactly the same as the Hebrew word for doubt: ‘sufek.’

The Zohar specifically frames doubt around the behavior of complaining – as Cypher did. (See below.)

When a young man who lives at ease in his father’s house begins to make all sorts of complaints and demands, saying, “I want this, and I do not want that”, he attaches himself to that “sore evil”, and he will be punished both in this world and in the world to come. Concerning such a case, King Solomon said: “There is a sore evil… riches kept for the owners thereof to their hurt.” Such was the case of the Israelites: the Holy One, blessed be He, carried them on eagles’ wings, encircled them with the clouds of glory, made the Shekinah go before them, gave them manna to eat, and sweet water to drink, and yet they complained! Hence, “and Amalek came.”
Zohar 2:65b-66a

The comparison between Cypher’s complaints, and those of the people after being freed from Egypt, in the Bible’s book of Numbers, is remarkable. Both failed at attaining their desired destination.

Here is the direct comparison:

Cypher: “I’m tired of … eating the same god damn goop every day.”
Numbers 11:14: “Our souls are dried away, there is nothing at all but this manna …
“Who will feed us meat?”

Cypher: “I’m tired of that jack (Morpheus) … and all of his bull. … He lied to us, Trinity. He tricked us!
If you’da told us the truth, we woulda told you to shove that red pill right up your ass… You call this free? All I do is what he tells me to do. If I had to choose between that and the Matrix, I choose the Matrix.
Numbers 16:13: “Is it a small thing that you (Moses) have brought us out of a land flowing with milk and honey, to kill us in the wilderness, and do you also make yourself a prince over us? Moreover you have not brought us to a land flowing with milk and honey, nor given us inheritance of fields and vineyards: will you also put out the eyes of these men?”

There should not be any ‘doubt’ over what Cypher represents and what it was caused by.

Persephone: The Other Side of Trinity in the MatrixArticles, Character Profiles, Persephone