The Oracle as a Guide

You’re not seeing double. We just wanted to honor both actresses who played the role of the Oracle, played by both Gloria Foster and Mary Alice.

The Matrix story describes the Oracle and Architect as the “mother and father” of the Matrix. Kabbalistically, she relates to the attribute of Binah/Understanding and him to the attribute of Chokhmah/Wisdom. These two attributes are said to “not separate” from one another. How we relate to them can and does change, however. The prime example is in the connection between Neo and the Oracle across the movies of the trilogy.

Binah and Chokhmah are part of the three upper emanations called the brains or ‘intelligences.’ Though Chokhmah translates as ‘wisdom, it correlates to the idea of a singular flash of intellect. The term is made up of the words koach and mah, meaning the potential of what is. One way to think of this is “composite unity.” This explains why the Architect is so “single-minded” while being so full of information about human history.

Binah is associated with the power of conceptual analysis and reasoning. It takes that single point of information in Chokhmah and ‘unpacks’ everything in it. This is rooted in the kabbalistic idea of “understanding one thing from another” (hameivin davar mi toch davar).

Insight on the Oracle from the Architect

As mentioned, these two attributes are “joined at the hip.” Thus, we would expect to learn more about the above concept as it relates to the Oracle, from her counterpart, the Architect.

His description of her role in the process of creating a functioning Matrix world aligns with the above definition:

“The first matrix I designed was quite naturally perfect, it was a work of art, flawless, sublime. A triumph equaled only by its monumental failure. The inevitability of its doom is as apparent to me now as a consequence of the imperfection inherent in every human being, thus I redesigned it based on your history to more accurately reflect the varying grotesqueries of your nature. However, I was again frustrated by failure. I have since come to understand that the answer eluded me because it required a lesser mind, or perhaps a mind less bound by the parameters of perfection. Thus, the answer was stumbled upon by another, an intuitive program initially created to investigate certain aspects of the human psyche. If I am the father of the matrix, she would undoubtedly be its mother.”

Here are some key takeaways from the Architect’s words:

“I’m interested in one thing, Neo, the future. And believe me, I know – the only way to get there is together.”

The function of Binah, creating a multitude of possibilities, relates to all possible future scenarios. Chokhmah reflects the singular path of the past. Interestingly, this concept also relates to the path ‘back’ to the Source and ‘singularity.’

A Key Point of Understanding

Keep in mind that the progression ‘downward’ on the Tree of Life diagram, goes from; the Source to the Architect, to the Oracle, then to the lower program and Matrix worlds.

Conversely, for a human seeking to “know themselves” (re: the Oracle’s Temet Nosce sign) and connect to the Source, things go in the opposite direction; from the Matrix world, through the programs, to the Oracle, then the Architect, and finally the Source. (This is the “path of the One.”)

This is something to keep in mind when studying any of the emanations or the character’s attributes associated with them. They are understood in different ways depending on if you are viewing things from the “top-down” (how things came to be from the Source) or “bottom-up” (how we get back to the Source.)

Oracle’s Insight: Knowing What You’re Here To Do

The key role that the Oracle plays in her relationship to the humans is summed up in this exchange:

The concept of ‘knowing’ in kabbalah has to do with ‘intimate connection.’ This can be in a physical, emotional, intellectual or spiritual sense.

Examining the following diagram, you can see how the Oracle, functioning as Binah/Understanding, is the gateway/connection between the upper realms (her, the Architect and the Souce) and the lower program and Matrix worlds below. 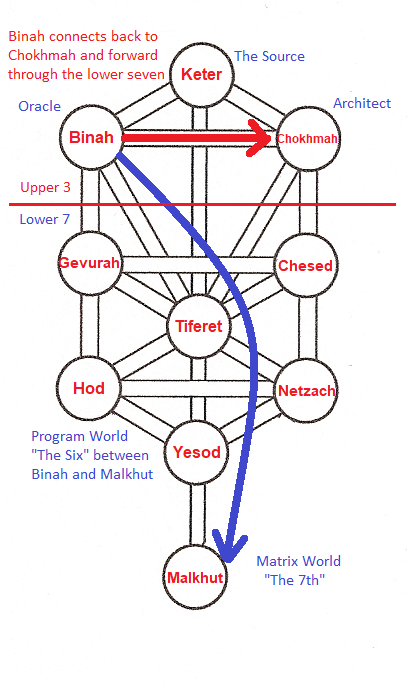 This is the function of the attribute of Binah, which is called the “mother” or “upper female.” As such ‘she’ not only connects to the lower emanations, she is the force that helps bind them together.

What Rama Kandra was saying about the Oracle in the quote above, is reflected in this ancient text relating to Binah/Understanding, which her character represents:

“This is the sefirah called Binah. You must be aware that this is the Name that connects all the sefirot with its powerful bonds of emanation and magnetism. For this is the third name of the three highest Names which are united and are intimate with Keter (the highest sefirah). From this name, the everflow of light, emanation and blessing, flows through all the channels until the lower seven sefirot are blessed from the three upper sefirot”
“Sha’are Orah” (Gates of Light), Yosef Gikatilla, 12th century

As the Architect revealed, the Oracle has the intuition to ‘make the system work right.’ She connects with each ‘freed’ human and gives them the information they need to establish the condition they are to meet.

As she subtly told Neo,

In kabbalah, the terms ‘free’ and ‘freedom’ are associated with the emanation of Binah.

“Choice. This is About Choice.”

There remain many possible futures, all dependent on our choices.

Morpheus attempted to clarify this for Neo, early on:

Neo: So is this the same Oracle who made the prophecy? … And she knows what? Everything?
Morpheus: She would say she knows enough.
Neo: And she’s never wrong?
Morpheus: Try not to think in terms of right or wrong. She is a guide, Neo. She can help you to find the path.

The Oracle’s role is to effect change. She tells every person “exactly what they need to hear.” This is why the topic of choice comes up throughout the movies – sometimes subtly.

The first people Neo meets at his apartment door are a man named Choi and a woman called Dujour.  The phrase “Choi du jour” means “choice of the day.” At the very end of The Matrix Revolutions, Neo tells Smith he ‘chooses’ to continue fighting.

“Between stimulus and response there is a space. In that space is our power to choose our response. In our response lies our growth and our freedom.”
– Viktor Frankl

Whatever a person chooses enables some new connection. Sometimes this is good, in terms of personal advancement, and sometimes, it takes them off course.

Whatever direction this connection goes in, it enables change, and this change sets a new condition. It’s a continual cycle meant to elevate the person away from the Matrix toward the Source.

As she explains to Neo about the Architect and herself:

Oracle: That’s his purpose: to balance an equation.
Neo: What’s your purpose?
Oracle: To unbalance it.

We will develop the concept of the Oracle in future articles. This was just a short introduction.

The Architect: Wisdom and the Father of the MatrixArchitect, Articles, Character Profiles