Just as the Matrix world corresponds to our physical world, in that both conceal the truth of a greater reality, neither is totally void of ‘truth.’  It is “out there.” When people turn from their self-centered desires (what the Matrix offers) they can make the first connection.

As mentioned in our profile on Trinity, with regard to Neo, she functions as the specific emanation of this hidden reality within the Matrix — the one that he first ‘accepts.’ Neo then merits his next connection to Morpheus, who at this juncture functions in a capacity of the second emanation, this one called Yesod (‘Foundation’).

Just as a child slowly transitions from the mother’s care to learning from their father, in the same manner, Neo had to connect with Trinity before being handed off to Morpheus.

The Significance of Morpheus at Yesod

In kabbalah, the position of the attribute of Yesod ‘above’ Malkhut (our world/the Matrix) is significant in that it acts as the connection between “us below” and ALL the higher realms above.

Everything going up from Malkhut, or back down to it from above, passes through Yesod. (See diagram below.)

When functioning in this role, Morpheus is in a unique position. In some ways, he may be considered the most important figure in the Matrix storyline.

Without his influence, Neo does not take the red pill, “and the story ends,” as Morpheus said to him. Neo would do a ‘U-turn’ and go back to the world of concealment.

Morpheus represents the concept of the “righteous person,” called the ‘tzaddik,’ (tzah-deek), which has a special connection to Yesod. Such a person has a great influence on providing the spiritual understanding needed to escape the world of concealment.

In the case of Morpheus and Neo, the former brings the higher ‘rules of the Matrix’ down to his student.

The ‘line’ from Malkhut to Yesod is called, “the path of the tzaddik.” (See the Bahir commentary, below.)

Simply stated, without “righteous people” the world would descend into chaos. They are the key connection. Picture Yesod ‘missing’ in the diagram and Malkhut being isolated, cut off from all the above sources of positive sustenance.

This is the reason behind why the Oracle told Neo the following:

“Poor Morpheus. Without him we’re lost.” 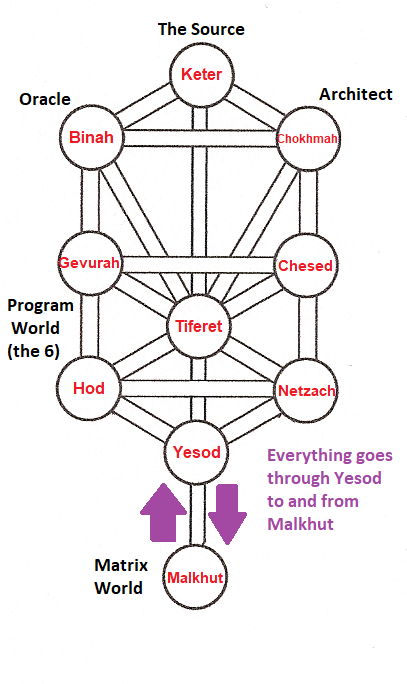 Why does the Oracle make such a powerful yet cryptic statement?

An ancient text, called the Bahir, holds the answer:

“We learned: There is a single pillar extending from heaven to earth, and its name is Righteous (Tzaddik). This pillar is named after the righteous. When there are righteous people in the world, then it becomes strong, and when there are not, it becomes weak. It supports the entire world, as it is written, “And Righteousness is the foundation (Yesod) of the world.” If it becomes weak, then the world cannot endure. Therefore, even if there is only one righteous person in the world, it is he who supports the world. It is therefore written, ‘And a righteous one is the foundation of the world.’”
Bahir: 102, Nehunya ben HaKanah (2nd century)

A modern commentary on the Bahir, explains this in accordance with our diagram:

“One who wishes to ascend on high must always travel along the path from Malkhut-Kingship to Yesod-Foundation. Looking at the diagram of paths, it is evident that, while there are many paths interconnecting the other Sefirot, there is only one path leading from Malkhut-Kingship, the lowest Sefirah, upward, and this is the path leading to Yesod-Foundation. This path is called Tzaddik, the Pillar of Righteousness.”
The Bahir: Translation, Introduction and Commentary, Aryeh Kaplan

What the above reveals, is that the “path of the One” in The Matrix, is the “path of the tzaddik.” It is the connection between the world of concealment (the Matrix world in Malkhut) to and through Yesod (the righteous) to “all else” that eventually goes to “the Source.”

For Neo, the “path of the tzaddik” begins with accepting what Trinity offered, to connecting with Morpheus.

A person may be fortunate enough to make the connection within Malkhut (as Neo did with Trinity) but if you are not acting in a “selfless and morally upright manner,” you will fail at Yesod and go no further.

An example of the latter that we find in the Matrix is in the character of the Merovingian.

Success Versus Failure at Yesod

Speaking to, and of  Neo, she says:

Of course, that’s only part of the Merovingian’s problem. We explore the rest on his profile page.

Morpheus went to the other extreme. This is sometimes the case with someone who must focus all energy on the mission they’ve been given, forgoing personal desires. For instance, in the Biblical narrative, Moses sent his wife Zippora to live with her family so he could devote himself totally to his mission.

Likewise, in his dedication to “finding the one,” Morpheus removed himself from an intimate relationship:

Trinity: “She (Niobi) used to be with Morpheus. Now she’s with Lock.”
Neo: “What happened?”
Trinity: “Morpheus went to the Oracle. After that everything changed.”
Neo: “Yeah, she can do that.” 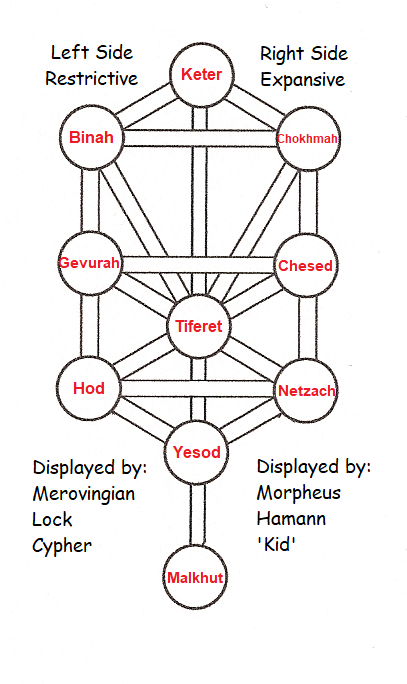 In addition to his ‘connecting’ role at Yesod, Morpheus strongly exhibits attributes from the expansive “right side” of the Tree of Life. This is especially seen in how he speaks of and shows his belief/faith.

The boundlessness of the right side, is reflected in ideas that do not require the ‘restriction’ demanded of things from the restrictive left side.

This puts him at odds with Commander Lock, who operates from the left:

Commander Lock: “Dammit, Morpheus. Not everyone believes what you believe.”
Morpheus: “My beliefs do not require them to.”

(This is not to say the left-side emanations are ‘bad.’ Simply that their restrictive aspect can be the root for self-centeredness, narcissism, etc., if they are not properly connected to the ‘path’ of truth. We see this in several characters as depicted in the diagram.)

Morpheus’ ‘belief’ is rooted in the ‘singular’ truth of what came before the Matrix. From the onset of the first movie, he speaks much of the past.

For example, we hear this in his explanation to Neo about the creation of the Matrix:

“When the Matrix was first built, there was a man born inside who had the ability to change whatever he wanted”

And his cave speech about the beginning of the man-machine conflict:

This aspect of the “past” is based in the upper emanation of Chokhmah (Wisdom) which is directly above Chesed (Mercy) on the right side. (See the diagram above.)

This is a reflection of the Architect who, functioning at Chokhmah (and existence before ‘Creation’), is very ‘singular’ minded, reflecting that there is but one ‘past.’ (Note how much of his conversation in The Matrix Reloaded with Neo is past-oriented.)

Compare this to the Oracle, who exhibits the opposite from the left side, as when she stated,

There are many possible futures, each dependent on ‘choice.’

More aspects of Morpheus’ character will be discussed in our thematic articles. Be sure to also follow his blog!

The Oracle: Understanding and The Mother of the MatrixArticles, Character Profiles, Oracle