Seraph: Top Gun in the World of Angels

The name of the character ‘Seraph’ (played by Collin Chou) is a term for a high-level of spiritual entities kabbalistic tradition. The term refers to a “burning one” – something Neo sees when he first views him.

In our background material on the worlds of existence, we discussed how the realm of angels is the world between the spiritual heavens and our physical earth. This refers to the concept of angels as ‘messengers’ – which is the literal meaning of angel in Hebrew (‘malakim’).

Seraphim, however, are not “messenger-angels.” They are associated with the world of Beriah, the upper world of Creation – the world of the Oracle. 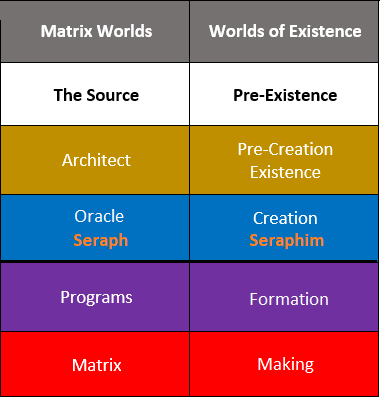 Seraph: Guardian of the Heavenly Throne

A seraph can thus be seen as the ‘guardian’ in the world of Beriah, and in relation to the Matrix, guardian of the Oracle.

The Oracle is the critical connection between the humans ‘below’ and the upper worlds ‘beyond’ hers.

This is why Seraph states:

“I protect that which matters most.”

In what sense does the Oracle “matter most?”

The Oracle as the emanation of “Understanding,“ at the level of Creation, connects everything below it.

This is expressed in this kabbalistic work:

“This is the sefirah called Binah. You must be aware that this is the Name that connects all the sefirot with its powerful bonds of emanation and magnetism. For this is the third name of the three highest Names which are united ... From this name the everflow of light, emanation and blessing, flows through all the channels until the lower seven sefirot are blessed from the three upper sefirot.”
“Sha’are Orah” (Gates of Light) Yosef Gikatilla, 12th century

To Fight is to ‘Know’ Him

Neo meets with the Oracle three times – once in every movie. She sets his ‘condition,’ each time, which he then has to learn to understand and fulfill. When Neo ‘meets the condition’ given to him, he has rectified that level of himself – of his soul. (And we get another movie!)

Neo did have something he had to attain even before his first meeting with the Oracle. In “The Matrix,” he had to ‘fight’ Morpheus to become ready to meet the Oracle (i.e., connect to Binah).

This connection was at the soul-level of Nefesh in the first Matrix movie, which is also the aspect of Binah/Oracle in the ‘lowest’ world of Asiyah/Making.

In order to now access Binah/the Oracle at the next soul level of Ruach (the next world of Yetzirah/Formation), Neo once again has to ‘fight’ someone. Only this time it’s a real battle, at least until Seraph stops it.

This leads to a sensible question:

As Neo has a much stronger knowledge of the Matrix by now, why does he have to get into this fight – even if it isn’t a ‘real’ one?

Seraph gives a strange answer to Neo’s inquiry as to why they had to fight:

“You do not truly know someone until you fight them.”

The term to ‘know,’ in kabbalah, is da’at. It relates to an “intimate connection” between things – where something becomes ‘one’ with the other.

This can be physical, emotional, intellectual, or spiritual. The same term is used in the Biblical narrative to describe things from Adam and Eve having sexual relations, to the prophets ‘connecting’ with G-d in a meditative state.

Neo had to create the proper ‘connection’ before Seraph could let him move forward to meet the Oracle at this new, higher level, and embark on his next ‘condition.’

This is his task in The Matrix Reloaded.

This is the same principle Morpheus was teaching Neo in their early combat training. He had to “connect with” the rules of the Matrix, which he could then bend and even break, through fighting his teacher.

The clue is found in what Morpheus said to his student:

What are you waiting for? You’re faster than this. Don’t think you are, know you are.

As we will see, Neo ‘knowing’ this about himself, directly relates to the sign in the Oracle’s apartment (“Temet Nosce” = Know Thyself).

The Merovingian: Failure as the One in the MatrixArticles, Character Profiles, Merovingian