Temet Nosce – A Latin Sign for a Greek Oracle?

“Temet Nosce” is a LATIN phrase meaning, “Know Thyself.”  The ‘Oracle, in literature, is a GREEK mythological figure. As things are rarely as they appear to be in the Matrix trilogy, this should be a hint that the answer may not be from anything Latin or Greek.

The Temet Nosce sign makes two ‘appearances’ — once in The Matrix and again in Matrix Revolutions.

One is the first time the Oracle and Neo meet:

The Oracle: So, what do you think? Do you think you’re The One?
Neo: I don’t know.
The Oracle: You know what that means? (Pointing to the Temet Nosce sign.) It’s Latin. Means “Know thyself”. I’m going to let you in on a little secret. Being The One is just like being in love. No one can tell you you’re in love, you just know it. Through and through. Balls to bones. Well, I better have a look at you. Open your mouth, say Ahhh.

After this exchange, the Oracle proceeds to tell Neo he is not the One.  At least “not yet.” She makes it clear that the possibility does exist. (In reality, she is using ‘doubt’ as an agent of change – telling Neo, exactly what he needs to hear.)

To Know What It Is To ‘Know’

The concept of “knowing” in kabbalah, implies a very intimate unity. The term is “da’at,” pronounced “dah-aht.’ This intimate bond can be physical, emotional, intellectual or spiritual.

For example, Da’at is the same term used in Genesis 4:1 to describe Adam having sexual relations with Eve. It is also used to describe “spiritual knowledge,” in terms of connection to G0d, in Daniel 12:4.

As a simple explanation, if someone were to ask you what 2 plus 2 equals, you would without hesitation answer 4. You didn’t need to pause and think about the answer – that bit of information is “part of you.”

That is true da’at. It is the idea of a complete connection to something or someone.

“Know thyself.”  OK, but what is this ‘self’ we need to ‘know,’ and what’s how do we accomplish this?

This takes us back to our background study on the sefirot. Those ten emanations are not only the building blocks of each world of existence, they are also the attributes that we humans are designed upon.

Kabbalah relates this construct of ten to the “Image of God.”

This brings us to the second mention of the Temet Nosce sign, this time in The Matrix Revolutions:

At which moment, the Oracle points to the sign above his head, and Neo replies: 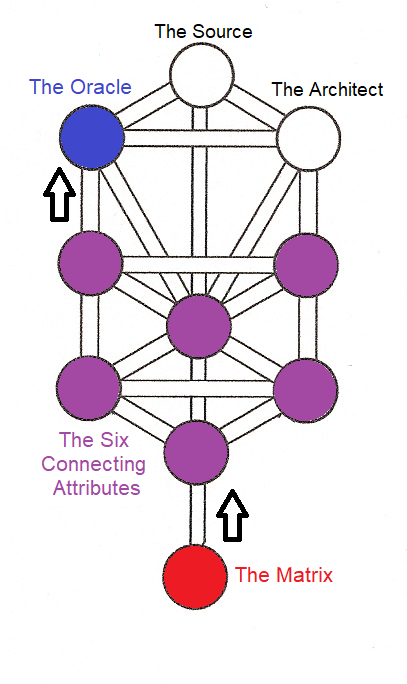 The process of “knowing yourself” is based on this system of attributes that we are designed upon, and the particular ways and intensities those attributes manifest in each person.

The six ’emotive’ or ‘connecting’ attributes are specifically the ones we “work on” through each cycle of change.

Those six intermediate attributes are the main part of the path of “knowing yourself” – the path of the One.

This is also important regarding why Neo is the “6th” and final “One.”

The Oracle, positioned immediately above the six, is the one instigating this process for the freed humans. This is her purpose of ‘unbalancing’ things (as she calls it) in the lives of the characters. She sets the condition for all who are freed and meet with her.

The Path of the Three Matrix Movies

Finally, as we outline in our introductory article, the Matrix movies follow what are called the levels (or dimensions) of the soul – of which there are five.

Neo proceeds from the lowest one ‘upward,’ from one film to the next. As he attains a state of “knowing himself” at one level, he moves to the next.

This journey is also understood as Neo attaining the height of Personal Consciousness by the end of The Matrix Revolutions.

As we mentioned in our Intro article, kabbalah teaches that getting beyond this level of Neshama, to the higher soul dimensions of Chaya (life) and Yechidah (oneness) requires the soul to be free from the limitation of the body.

In the Matrix story, this means Neo would have to die. The Matrix Revolutions thus ended ‘appropriately.’

The fourth soul level of Chaya, being the life-force “beyond creation,” is one of Collective Consciousness. This relates perfectly to a fourth movie where the people must become more like Neo, shifting their desires from the self-centeredness that got them into the Matrix, to that of self-denial (‘bittul’).

This is the highest level of Yechidah, marking a return to the Source, of what humanity should be. Attaining that final state would bring them to the fulfillment of the prophecy.

The Spoon in the Matrix – WHY There is No SpoonArticles, Spoon, The Matrix

Matrix Programs and Their HierarchyArticles, Programs, The Matrix Reloaded