“What Matters is the Connection the Word Implies.”

Thus far we’ve reviewed the first two of the four-step process that each human freed from the Matrix faces. We now move on to the third – Connection. 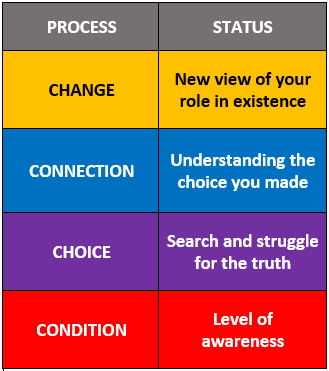 Once a choice has been made, based on what the ‘condition’ the person faces, some type of connection is established that did not exist prior to that choice.

This is the next step of the process toward enabling “change” of some type to come into existence.

The most critical connection made in the Matrix story is when Neo discovers the world of the Matrix, after making the choice to take the red pill. Prior to this, he had an illusion of free will within the Matrix.

Following that choice, he connects with true reality. His subsequent involvement with the Matrix will effect change upon him and enable a much greater dimension of free will and choice.

There’s a Reason for the Struggle

The process of “making the connection” is rarely something that is completed in an instant after making a choice. One can be “knocking on the door” of connection but still needing to accomplish something to attain it. We saw this the first time Neo met the Oracle.

The ‘connection’ phase is related to the idea of attaining a “new level of understanding.”

As the Oracle informed Neo:

“Because you didn’t come here to make the choice, you’ve already made it. You’re here to try to understand WHY you made it.”

This goes hand in hand with something else she said:

“We can never see past the choices we don’t understand.”

In their first dialogue, the Oracle cleverly set down the condition, even using ‘doubt’ in a manner that would later provoke Neo.

She presented a major choice to him – one that would eventually lead to his making a connection that leads to a change in his ‘status,’ internally and in the eyes of those close to him:

That choice led to a new connection for Neo, and a change to his knowledge he is the One.

The idea of his then “knowing” he is One, relates to the concept of ‘da-at,’ which is the kabbalistic term for ‘knowing’ in the send of becoming intimately connected with something (or someone) so that it becomes bonded to you.

This relates back to the Oracle’s apartment sign, Temet Nosce (“know thyself”) and why she made a point to bring it up to Neo.

The Oracle herself, as the third level of existence (from the bottom up) on the path of the One, directly correlates to connection and knowing:

Matrix Elements: Choice – The Product of the ConditionArticles, Oracle, The Matrix Reloaded