Gematria Concepts in the Matrix

A good definition might be “spiritual geometry,” as it goes much deeper than standard ideas of ‘numerology.’ There are numerical values for letters, words, phrases, names, as well as combinations of these. In the latter case, it can be two concepts coming together to reveal a third, as we give example of below.

Gematria is grounded in the same spiritual concepts associated with the two templates we began with, in our Introductory files in the Knowledge Base.

As with many things related to kabbalah, gematria can be abused when removed from its proper framework. An important axiom is that no idea is created ‘from’ gematria. You can’t just ‘make stuff up’ then look for numbers.

Gematria should be seen as something that ‘reinforces’ what is already understood. Also, gematria for kabbalistic concepts is applicable only to the language of the Bible, Hebrew, where it intricately ties to its deeper concepts. There is no correlation outside of the original framework.

As The Matrix is based on kabbalistic concepts, there are a number of times that numbers appear which relate to very deep ideas. We will examine three in this section. What’s interesting, though not unexpected, is that the three connect to one another – all around the numbers 6 and 7 – the groom and bride.

Hold on to your lunch, here we go. – Niobe

The first example is the most straightforward and one of the more compelling examples of how The Matrix is based on kabbalistic ideas.

When Neo meets the Architect, he learns that he is not the first who became “the One”:

As Neo shows through his actions, the sixth was to be the last – at least for the purpose he has in the trilogy. The reason lies in something we discuss further down this post — a very specific type of love – for Trinity.

Architect: Your five predecessors were, by design, based on a similar predication – a contingent affirmation that was meant to create a profound attachment to the rest of your species, facilitating the function of the One. While the others experienced this in a very general way, your experience is far more specific – vis a vis love.

This idea traces itself back to the Zohar, the preeminent text of kabbalah. Here we find an interesting excerpt relating to the soul and a mystical ‘angelic’ figure called Metatron – a subject we discuss further below. This entity has a direct relationship with what are called “six aspects” and “six revolutions.”

The six aspects are another way of referring to the six sefirot of; Chesed, Gevurah, Tiferet, Netzach, Hod, Yesod. They are the group of sefirot that make up what is called the ‘son’ and “divine groom” that unites with the ‘bride’, Trinity, at Malkhut below.  (Refer to our introductory article on the sefirot and Example #2 below.)

Note that in this text, the soul of such a person can only, “experience six revolutions (being ‘reloaded’ into a new incarnation),” completing the “six stages.” before it will return to its source:

When a soul is doomed to undergo transmigration (gilgul), should it be one which has emanated from the side of the Servant, Metatron, who represents in himself six aspects, then the successive revolutions of that soul will not be more than six times until it shall have completed the six stages which lead back to the region from whence it came.
Zohar, Exodus 94a-b

As discussed, this completion of “six stages” relates to the concept of “know yourself” on the Oracle’s Temet Nosce sign in her kitchen.

The central focus in much of the Kabbalah is on the Partzufim of Zeir Anpin and Nukvah, and their interrelationship. This is because it is primarily between these two Partzufim that the world in which we live in is governed.
Secrets of the Future Temple, Rabbi Moshe Chaim Luzzato

Our second example stems from above and introduces a concept called ‘chibur’ which means ‘joining.’ This is when two concepts come together to create another. The numbers for the former are ‘joined’ (usually multiplied) and the resulting product/number, relates to the gematria of a third idea.

As mentioned, Neo’s specific love for Trinity separates him from his predecessors. Here we look at the idea of the “divine bride and groom” coming together.  As mentioned in our introduction to the sefirot, and in our profile on Trinity, the seventh emanation of Malkhut has a unique relationship to the others, especially the six above it. 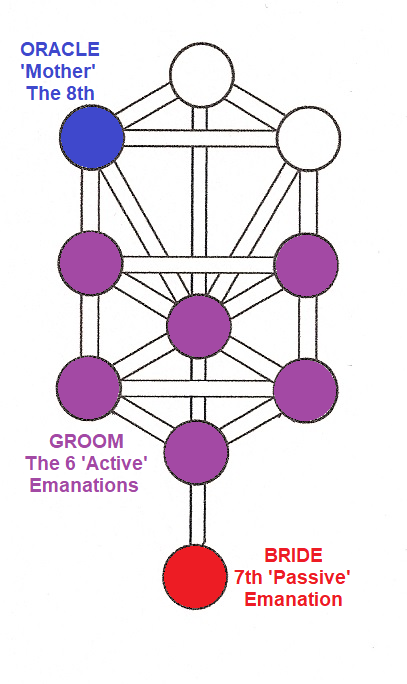 As discussed in our post on the Path of the One, the six emanations associated with the ‘groom’ relate to the Hebrew letter ‘vav,’ which is the sixth in that alphabet.

If you’ve ever heard of a custom of the bride circling the groom 7 times at a wedding, you now know why. The ‘feminine’ aspect of the 7th will also be an important part in the continuation of the Matrix story as we discuss in another post.

In the first Matrix movie, when Neo and Trinity both risk their lives and work together for the first time to rescue Morpheus, there is a scene where they take an elevator that stops at the 41st floor. However, they exit the elevator through the ceiling hatch, placing them on the 42nd level.

It is at this 42nd level that they ‘unite’ (literally), clinging to each other as one, to ascend the elevator shaft to the roof.

This was the first joining/chibur of the Trinity and Neo as bride and groom in the movies.

Neo, 42, and The Matrix Reurrections

The number 42 is very significant in kabbalah as the connection between ‘bride’ and ‘groom’ is seen as uniting the lower physical world (‘feminine’) with the angelic one (‘masculine’) above it.

So that rod (of Moses, connecting above and below) had engraved on it the ineffable Name on every side, in forty-two various combinations.
Zohar, 1:9a

These forty-two letters thus constitute the supernal mystical principle; by them were created the upper and the lower worlds, and they indeed constitute the basis and recondite significance of all the worlds.
Zohar, 2:234b

In the latter Zohar citation above, the power of connecting the two lower worlds is associated with what is called the “42-letter name of God.” This is not an actual personal name made of 42 letters, but a concept related to when the masculine and feminine aspects (“groom and bride”) are united.

This “connecting power” directly relates to a fourth Matrix movie, as it applies to re-establishing the harmony that the humans disrupted when they originally enslaved the machines.

Example #3: The Width and Breadth of the Window is 314 Seconds

In The Matrix Reloaded we come across a scene that has been the subject of much discussion on the internet since 2003.

Keymaker: “Once the door is unprotected, the connection will be severed. But another connection must first be made.”
Ghost: “How long will that take?”
Keymaker: “Exactly 314 seconds … That is the length and breadth of the window. Only The One can open the door, and only during that window can the door be opened.”

Just what are these 314 seconds? And why express “length and breadth” (related to space) in terms of seconds (related to time)?

The main guess on internet forums has been it has something to do with ‘Pi,’ which may be shortened to 3.14. Other than the three numerals being the same, there hasn’t been any cogent idea presented as to how ‘Pi’ has anything to do with the Matrix storyline.

Note that the Keymaker expressed the window of time as “length and breadth.” This reflects the concept of a chibur, a ‘joining’ of two numbers, which when multiplied, result in a product with significant meaning.

Referring to the Tree of Life diagram above, the six emanations of the groom (Neo) connect Malkhut (Trinity) to Binah (the Oracle). The latter two are the bride and the mother concepts – the two ‘females.’  As mentioned, the kabbalistic term for ‘female’ is ‘nukveh’ and that for the six sefirot making up the groom is ‘Ze’ir Anpin,’ meaning “lesser countenance.”

The gematria (numerical value of the letters) of ‘nukveh’ is 157. By correcting the six masculine attributes between the two females, Neo has joined them together. He has created a chibur, in this case, 157 multiplied by the 2, which is 314.

The Biblical example of this is Jacob who had two wives. Rachel was his Malkhut and Leah, his Binah. Jacob is seen as “being the ladder” in his dream, just as Neo becomes the “Path of the One” himself as discussed in our post on this subject.

By rectifying these six attributes and connecting Malkhut to Binah, Neo merits passing through the door of light, to the next level (the Architect at Wisdom/Chokhmah) fulfilling the terms which the Keymaker described.

We’re Not Out of ‘Time’ Yet

A further aspect of the concepts surrounding 6 and 7 involves the sequence of events we are in the midst of, on the way to the destruction of the Matrix, and return to a proper state of harmony between the humans and machines.

Neo has done what he was there to do in terms of connecting the worlds together. This centered around him as the ‘ladder’ or path, which relates to the six ‘masculine’ attributes.

There remains something to be done regarding the seventh ‘feminine’ attribute that must occur within the Matrix (even though Neo ‘died’ in The Matrix Revolutions).

Expect a strong female character to emerge in the fourth movie. We discuss this further in another post. We might even hint as to who this will be.

Neo ‘became’ the ladder – the 6 emanations of the groom. He is also the 6th version of the One. This parallels the mystical figure of Metatron mentioned in the Zohar passage above. Metatron is said to be, “the embodiment of the work of the chariot” – a term referring to connecting the worlds from below to above.

Finally, a clue to what Matrix 4 will bring. What happened between Neo and Trinity at a more ‘cosmic’ level, must occur at another level, across humanity, for the end of the Matrix and final redemption to come:

Evil and Imperfection in the Matrix TrilogyArticles, Smith, Source