Bittul and Repair of the Matrix

At this point in the story, Neo stands on the verge of satori, ready to resolve the paradox of choice and choicelessness, of free-will vs fate, but that can only be achieved through an act of surrender, which only occurs after he has abandoned the perspectival nature of truth, accepting the totality of present consciousness.
Lana Wachowski

The kabbalistic term for selflessness or “self nullification” is bittul. It is a state of being where you view yourself as ‘nothing’ compared to the “greater cause.” In Kabbalah, relates to both the repair of our own souls and the eventual repair of the world.

An early example of this is in the first movie when the main characters are between the walls of the building trying to escape.

Before Morpheus breaks through to thwart the attack upon them, he shouts:

You must get Neo out! He’s all that matters.

Bittul is an important concept in the Matrix trilogy. The actual journey to that point begins with ‘humility’ (‘anava’) which is not self-negation but the experience of oneself as ‘far away.’ This is what Neo feels when he is still lost in the Matrix, but sensing there is ‘more.’

As we’ve discussed, this “starting” point relates to the Nefesh level of the soul, as well as the attribute of Kingdom/Malkhut.

Neo reaches a state of bittul at the end of each of the three movies after going through a process of fulfilling the condition he was placed in.

Bittul in the Matrix Movies

The three Matrix movies relate to the advancement of the soul as depicted in the path Neo follows. At the beginning of each stage, he has a certain condition placed before him. When Neo meets the condition of one level of the soul, he can move on to the next.

This follows a similar path in all three movies:

Toward the end of each of the three movies, there is some aspect of Neo giving up his life. 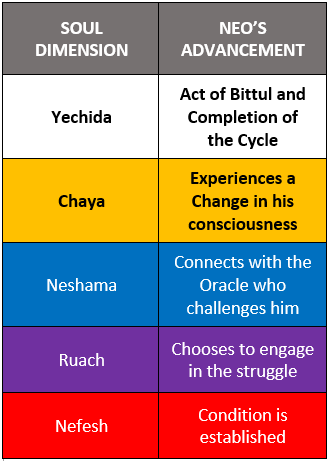 In the first Matrix movie, Neo ‘dies’ when he is shot by Smith.  This ‘death’ was not directed by his own choice, so it technically was not an act of selflessness. However, the actions leading up to it were clear examples of bittul, as he was acting with no regard for personal benefit, but on behalf of the other humans.

His ‘reward’ followed his ‘resurrection’ (after a special ‘kiss‘ from Trinity), and brought him to a higher level of understanding of what the Matrix is.  This marks the fulfillment of his first ‘condition’ at the level of Nefesh. He is now ready to begin a new phase of his life, and rectification of the second level of the soul, in the next movie.

In the second Matrix movie, Neo’s selflessness is more direct. When he and the others are running to escape the approaching sentinels, he chooses of his own volition to face them. This is a higher level of bittul as he really has no definite way of knowing if he will stop them or die.

Later, the Oracle tells him “he should have died,” were it not for his unique connection to the Source. (We discuss this at greater length in The Power of the One.) Trinity again plays a key role in helping Neo attain the next level of his rectification, through her ‘negotiating’ with the Merovingian.

The third movie presents the highest level of bittul.  Neo willfully embarks on a mission of almost certain martyrdom in his efforts to save Zion and the humans.

Though he is sure he needs to go to the Machine City, he won’t know precisely why until he encounters the Source – the “Deus ex Machina” at the very end.  He “walks in faith/belief” – something he learned from Morpheus.)

(The term “Deus ex Machina” only appears in the script and is not spoken in the movie itself. The literal meaning is “god from the machine.”)

Trinity again plays a key role, being “united with him” in this task, though this time she will not be around to “bring him back” as before. (See Gematria: Spiritual Geometry in the Matrix Trilogy for more on the connection aspect of their relationship.)

Neo: There’s something I have to say. Something you need to understand. I know I’m supposed to go. But beyond that – I don’t know…
Trinity: I know. You don’t think you’re coming back. I knew it the moment you said you had to leave. I could see it in your face. Just like you knew the moment you looked at me that I was coming with you.

Neo’s ‘reward’ goes beyond his life, which he surrenders to bring peace – albeit a temporary one.

Teshuvah: Return to the Source and SelfArticles, Neo, Oracle

Chashmal: The Train Station and Eyes of the OracleArticles, Merovingian, The Matrix Revolutions