The ‘Root’ of Evil

The kabbalistic ideas regarding evil are some of the deepest teachings. Digging into these is worth it for Matrix fans, as it is critical to what the story is really about.

In general, evil is usually thought of as “people doing bad things.” In movies and books, stories are often presented as, “bad guys versus good guys.” Most people view the Matrix movies accordingly. However, the explanation of ‘evil’ goes well beyond what we regularly think of.

Before looking into the Matrix films, we need to address the idea of the ‘root’ of evil. It may not be at all what you think.

A Quick Trip in the Time Machine

Rule #1: Think ‘conceptually’ going forward. Nothing involves actual people, time, or space until we get to the physical world (or with regard to the movies, the Matrix world).

As mentioned in our introductory material on the Worlds of Existence, before anything ‘existed,’ was a perfect ‘Singularity.’ We cannot fathom anything (any ‘thing’) about what that means, as this would require detailed thinking, and there are no ‘details’ with pure singularity.

For anything to exist separate from the perfect Singularity, it needed to ‘constrict’ (‘tsimtsum’) allowing a means for ‘otherness.’ (Remember Rule #1 above!)

Upon that first constriction – there was now some ‘definition’ to things, within what we call “existence.” Something we can ‘relate’ to.  This is the ‘immanent’ aspect of what many call God – that which we discuss, write of, pray to, etc.

That certainly sounds like a ‘good’ thing. On the other hand, what we have is an ‘image’ of the transcendent God. What does that imply?

The Anomaly is Systemic

In simple terms, the ‘problem’ with making an ‘image’ of something is it is a ‘downgrade’ from the original. And if you make a copy of the copy, this issue continues. The further away from the ‘source’ that you get, the more that original perfect image becomes ‘concealed.’

As explained in our Introductory files, following the world of existence, came the worlds of Creation. The same process unfolded through the emanation of these worlds, each being a tsimtsum (constriction) of the one before it.

As this is an increasing separation from the original perfection, it is “not good” in that sense.

This gives us the fundamental definition of ‘evil.’ It is anything related to moving away from the original perfection.

Evil in the Matrix: “From the Top Down”

Let’s review the above, in the context of the Matrix.

The Source represents the Singularity. The humans and programs do not have any direct relationship to the Source as it is not a program or human.  The Source is “something that is out there.” transcendent to their reality. Yet the source is ultimately “running the show.”

The Source thus has both a sense of simultaneously being connected and not being connected. This seems to be an interesting contradiction to say the least. It is one we address in a later article regarding Source.

As mentioned, the Source caused the Architect to come into ‘existence.’ Though he is the ‘creator’ of the Matrix, he is but an ‘image’ of the Source from which he emanated.

The Architect has a uniqueness, his own ‘image,’ but it is not the ‘perfection’ of his own creator. From the moment of the Architect being created, this imperfection found in him permeates everything else to come.

The ‘anomaly’ (evil) he speaks of, begins with himself. He cannot see this however, as he is the first ‘point’ of what is existence. (See articles on the Architect and the Door of Light.)

“I have since come to understand that the answer eluded me because it required a lesser mind, or perhaps a mind less bound by the parameters of perfection. Thus the answer was stumbled upon by another – an intuitive program initially created to investigate certain aspects of the human psyche.”…

Comparing this to science, he is the point just before the “Big Bang” that contained everything in creation within it. What came before that point (the Source) eludes scientists.

What occurred next was his attempt to create a world that was “in his own image.” He comes to partially understand the reality of a continued, worsening imperfection but lacks the means to truly correct it.

“The first Matrix I designed was quite naturally perfect, it was a work of art – flawless, sublime. A triumph equaled only by its monumental failure. The inevitability of its doom is apparent to me now as a consequence of the imperfection inherent in every human being. Thus, I redesigned it based on your history to more accurately reflect the varying grotesqueries of your nature. However, I was again frustrated by failure.”

The Architect went on to explain that, lacking a “permanent solution,” this imperfection (evil) will always have to be “dealt with” within the flawed world of the Matrix:

“Your life is the sum of a remainder of an unbalanced equation inherent to the programming of the Matrix. You are the eventuality of an anomaly, which, despite my sincerest efforts, I have been unable to eliminate from what is otherwise a harmony of mathematical precision. While it remains a burden assiduously avoided, it is not unexpected, and thus not beyond a measure of control. Which has led you, inexorably… here.”

Evil in the Matrix: “From the Bottom Up”

Kabbalah teaches that these “increasing layers of imperfection” impose many types of concealment between us and the spiritual worlds above. These barriers are called ‘klippot’ (singular: klippah) which carries the meaning of ‘shells’ or ‘husks’ that block the “light of truth.”

Just as our world is called, “the world of concealment,” Morpheus describes the Matrix in a similar fashion:

“It is the world that has been pulled over your eyes to blind you from the truth.”

He later explains the impact of such klippot in the Matrix:

The Matrix is a system, Neo. That system is our enemy. But when you’re inside, you look around. What do you see? Business people, teachers, lawyers, carpenters. The very minds of the people we are trying to save. But until we do, these people are still a part of that system, and that makes them our enemy. You have to understand, most of these people are not ready to be unplugged. And many of them are so inured, so hopelessly dependent on the system that they will fight to protect it. Were you listening to me, Neo, or were you looking at the woman in the red dress?

Our journey back to the Source is one of stripping away these klippot/barriers. They take many forms, however. They can be physical, emotional, intellectual or spiritual. This is another way of describing the journey of rectifying our souls as discussed earlier.

There’s But One Source

What the above teaches us applies to the Matrix:

The evil that blinds humans in the Matrix from the truth, emanates from the same root which caused the Architect’s frustration in his creation of the Matrix.

This idea is behind the kabbalistic concept that, “there is but one power” (Ein Od Milvado).

What then comes from this reality is the idea that, “everything is for the good,” even if we cannot understand how.

Morpheus reflects the above in the scene in Matrix Reloaded, after the Merovingian sent them away without giving access to the Keymaker.

As the ‘three’ stand in the elevator, this ensues. Note Morpheus final statement:

Neo: Well, that didn’t go so well.
Morpheus: Are you certain the Oracle didn’t say anything else?
Neo: Yes.
Trinity: Maybe we did something wrong.
Neo: Or didn’t do something.
Morpheus: No, what happened happened and couldn’t have happened any other way.

Taking this even deeper we come to this concept:

The very act of creation, one of causing something “less than perfect” (which is how we defined ‘evil’) to come into reality, was an act of pure goodness.

Without the understanding mentioned above, the idea of ‘evil’ coming from the perfect Creator sounds contradictory.

Having this insight helps greatly with this Biblical verse, that has been problematic for many:

Dealing With Evil In The Matrix

Back to the Architect’s problem – which is also our problem.

“We can’t make evil “go away” … Not without also making ourselves go away.

As long as there is some ‘thing’ other than that original, perfect Singularity, there has to be evil. It is necessary for other things to exist ‘separately’ – what we call ‘otherness.’

However, within the world of concealment (the Matrix) evil can be ‘transformed.’ There are basically two ways this can occur:

We see both of these within the relationship between Neo and Smith.

The end of the original Matrix movie reflects the first idea above. Smith was destroyed, yet appears in a different (and more powerful) capacity in Matrix Reloaded:

What happened here is that Smith uncoupled from his own original purpose.  He went from the job of minimizing the number of humans being freed and lessening their awareness, to one of bringing total destruction.

This is because independently, Smith now sees things strictly from the attribute of pure Judgment/Gevurah. The world he was made to protect he now seeks to destroy.

But remember what Morpheus said as it applies here as well,

“… it couldn’t have happened any other way.”

At was expressed by different characters through the Matrix trilogy:

This also applies to Smith, though we are not done with him yet …

Unification and Transformation of Evil

Evil is dealt with differently at the end of Matrix Revolutions. The tables are turned and Smith is ‘fooled’ into merging with Neo. By doing so, he connects with Neo whose selflessness (bittul) has elevated him all the way to a direct connection with the Source.

Once this happens, the “light of Singularity” from the Source, enters Neo. As Smith has merged with him, this light then permeates the entire Matrix which Smith had taken over. This is like an antidote using the same arteries a poison spread through.

What is ironic is Smith’s comment to Sati, where he said,

This ends up being true. Smith is simply a means to an end, which he himself had no idea of – until the very end, when it hits him:

There’s that ‘inevitability’ built into things – only not the way Smith (or even the Architect!) had considered. 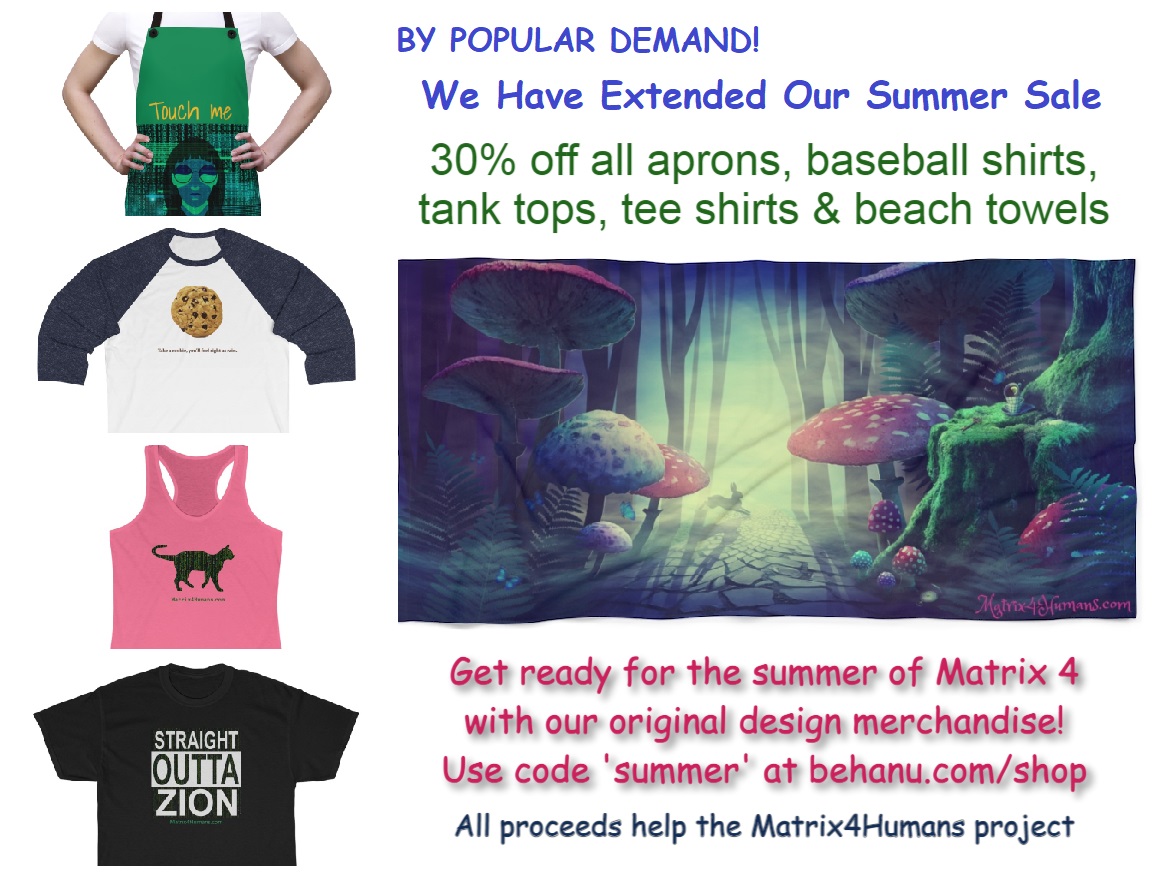