There Is No Spoon

“Do not try and bend the spoon, that’s impossible. Instead, only try to realize the truth …
There is no spoon. Then you’ll see that it is not the spoon that bends, it is only yourself.”

The scene with the “spoon boy” gave us one of the most quoted, yet least (kabbalistically) understood, lines from the Matrix movies. It is also key to understanding the entire “path” of the One and why Neo was successful where his predecessors were not.

Questions Abound About this Spoon

Let’s offer some questions on this scene:

The first key, is a psychological one, seen in the last part of the quote:

“… it is not the spoon that bends, it is only yourself.”

This is one of those fundamental, but difficult, realities we face in life. Stuff is going to happen that is out of our control and we need to learn to focus on how to handle it.

“When we are no longer able to change a situation, we are challenged to change ourselves.”

This is true, and others have written about it at this level. However, it still does not deal with the fact that there is a spoon – even if it is a ‘Matrix spoon.’

As always, there is always a deeper meaning in the Matrix.

Up Around the Bend

The Oracle, as we will recall, tells Neo, “exactly what he needed to hear.”

“Sorry, kid. You got the gift, but it looks like you’re waiting for something.”

So, what did she mean by this?

This is something that connects back to the Spoon Boy’ wisdom: 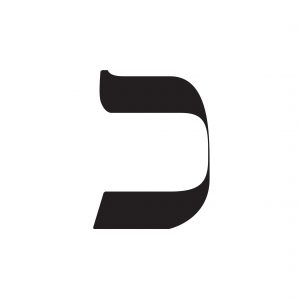 In Hebrew, the root of the word “spoon” is kafaf, which interestingly means, “to bend.”

The letter kaf  (portrayed to the right) in the word kafaf, is a letter that is bent. In kabbalah, it represents the aspect of submitting oneself to a greater power. Like ‘bowing’ in a bent-over fashion.

A fundamental teaching is that everything in existence is under “one power,” which is “beyond existence.” (The term for this is Ein Od Milvado – there is but one power.)

In the Matrix, this relates to the ‘Source’ as ‘existence’ begins with the Architect and we discussed in our introductory article.

The concept of ‘otherness’ is a ‘flaw’ within creation. (We discuss this later, in our “Matrix 4” articles.)

As everything emanates from that single ‘Source,’ all that happens to those who are on the true path, occurs for their benefit – even if it appears otherwise in the moment.

Thus, the meaning of, “trying to bend the spoon,” represents the idea of fighting against the purpose that emanates from that one power. We need to bend like the letter kaf.

This Too Is For The Good

Morpheus had an understanding of this concept, as we see following their first seemingly ‘failed’ meeting with the Merovingian.

Reviewing how they were sent away without attaining what they came for, this transpired between them:

Trinity: “Maybe we did something wrong.”
Neo: “Or didn’t do something.”
Morpheus: “No, what happened happened and couldn’t have happened any other way.“

Of course, Morpheus’ response is connected to his strong sense of ‘belief’ that is seen and mentioned throughout all three movies.

Even Agent Smith understood this to some degree, though his being solely rooted in the “left side of restriction” prevented him from connecting what he felt to the complete truth.

As he said to Neo:

“Our connection. I don’t fully understand how it happened. Perhaps some part of you imprinted onto me, something overwritten or copied. That is at this point irrelevant, what matters is that whatever happened, happened for a reason.”

When It Finally Hits You

“Spoon boy” is someone who has come to understand the true ‘singularity’ of existence. This was his way of sharing this with Neo.

Having pushed aside all that which was blocking his view of truth by the end of Matrix Revolutions, Neo realizes something profound:

Smith is not his enemy.

Neo understands that all along, the agent was just a means to an end, serving his ‘purpose.’ To quote both of them, “It was inevitable.”

This is why he freely allows himself to be “taken over” by Smith, as this too was to happen for a very profound reason, to correct evil in the system. (We will be discussing this at a deeper level in a future article.)

This is not the only misunderstanding regarding the Matrix. The other relates to the famous ‘prophecy,’ and the idea that it wasn’t true. (Both in the movie and supported in ‘fan theories.’)

The problem is one that goes back to something Morpheus said to Neo:

“… your weakness is not your technique.”

Neo’s ‘weakness’ was the inability to see past what he did not understand. Ironically, the same applied to Morpheus, his teacher. As the Oracle stated, this is something everyone, including the fans of the Matrix, is subject to.

The prophecy most certainly remains true, as we reveal in our Matrix4 articles in the Knowledge Base.

The Potentials in the Matrix Oracle’s ApartmentArticles, Potentials, The Matrix

Temet Nosce: The Oracle’s Sign in the MatrixArticles, Temet Nosce, The Matrix