Chashmal: Vision Into the Future

It’s time to go down some increasingly deeper rabbit holes.

After his altercation with the Trainman in the train station, Neo sits in silent meditation. There is positively no distraction.

“This place is nowhere.”

That may have sounded ominous when the words were spoken, but as we shall see, this too was “for the good.” Neo begins to have the vision of the three power lines leading to the machine city. Later, he interprets this as part of the next phase on his “Path of the One.”

There is a direct connection between the isolation he is in and what he experiences. In kabbalah, this experience is called ‘chashmal.’ It is known as, the interface between the physical and the spiritual.

This experience takes place in the Train Station, which is the corresponding interface between the Matrix and program worlds above. As discussed in our Introductory materials, these relate to our physical world and the lower spiritual world respectively.

As we will show, the connection also applies directly to the owner of the Train Station, the Merovingian.

Chashmal is described as the two parts of the mind experiencing different things simultaneously. The concept goes back to Ezekiel’s vision in the Bible:

And I saw, and behold, a tempest was coming from the north, a huge cloud and a flaming fire with a brightness around it. And from its midst, it was like the color of the chashmal from the midst of the fire.
Ezekiel 1:4

The word Chashmal is a combination of ‘chash’ meaning silence, and ‘mal,’ meaning speech. This seems an odd combination at first glance.

“Chashmal. It’s a very mystical word that Ezekiel speaks about, which is translated as “everything.” It is described as the “speaking silence.” One gains a total inner silence. One is able to really listen, and only then one can hear. What people usually ignore in Ezekiel’s vision is the very end. The whole vision is a meditation in preparation for hearing the Word.”
Aryeh Kaplan, “Conversations in the Spirit,” WBAI radio interview, June 6, 1980

This is the “total inner silence” that the ‘nowhere’ of the Train Station experience provided for Neo. It was something he needed in order to increase his understanding of his role as the One.

This is all in accordance to what Morpheus said before Persephone showed up at the elevator:

‘What happened, happened, and couldn’t have happened any other way.”

The vision Neo experienced in the Train Station becomes more clear later on, revealing that he needed to take a ship to the Machine City.

The Merovingian and the Eyes of the Oracle

There are several terms derived from the Hebrew root, ‘chash’ found in ‘chashmal.’ They include; Nachash (serpent) and Lachash (pertaining to various types of ‘divination.’).

The latter term, ‘lachash,’ is when the individual attempts to ‘see’ things that are normally hidden from the physical senses. The root, ‘chash,’ expresses paranormal vision, through which one gazes into the spiritual realm.

There is an interesting connection between the Merovingian (who owns the Train Station) and the concept of chashmal as he makes clear his desire to see further into reality:

This tells us where the ‘lachash’ (divination) connection is established with him.

However, is the Merovingian also connected to the idea of ‘nachash’ (serpent)?

What the Neo-Merovingian Connection Unveils

Persephone’s words, spoken to Neo, and the ‘101’ connection between Neo’s apartment number and the Merovingians’s restaurant (also marked 101 in the lobby) hint at something deeper.

Both Smith and the Merovingian have a connection to Neo – but not of the same nature.

The Oracle informs us that Smith is not (nor ever was) exactly the same as Neo:

He is you. Your opposite, your negative.

Persephone, however, described the Merovingian and Neo as being very much the same once:

In a very peculiar section of the Bible, in metaphorical language, there is described a “King of Tyre” as being the serpent (nachash) in the Garden of Eden.

Reading this, keep in mind the Merovingian being like Neo in the past, his desire for chashmal (divination), as well as the idea of nachash, meaning serpent:

You were the seal of perfection, full of wisdom and perfect in beauty.  You were in Eden, the garden of God; Every precious stone was your covering: … You were perfect in your ways from the day you were created, Till iniquity was found in you. By the abundance of your trading you became filled with violence within. And you sinned; Therefore I cast you as a profane thing. Out of the mountain of God;  Your heart was lifted up because of your beauty. You defiled your sanctuaries, by the multitude of your iniquities, by the iniquity of your trading.
From Ezekiel chapter 28

Three specific qualities stand out in the text regarding the figure in question.

This is the Merovingian. Everything he does is self-serving. His ego convinces him that he is above everyone.

For the final insight on this post, it’s time to really “bake some noodles.”

Taking all of the above into consideration (plus a lot of dialogue from him) we have a picture of the Merovingian as becoming arrogant to the point of thinking of himself as a godlike being.

The son of destruction, who opposes and exalts himself against every so-called god or object of worship, so that he takes his seat in the temple of God, proclaiming himself to be God.
2 Thessalonians 2:4

In another amazing ‘connection,’ here is a top-down view of the “fight scene” in Matrix Revolutions where Trinity, Morpheus, and Seraph visit the Merovingian to try to free Neo, whom he holds captive.

Note the hexagon directly in front of the Merovingian on the table. Now look again, this time at the larger oddly-shaped silver area surrounding the hexagon.

Why such a strange design in such a symmetrical environment? 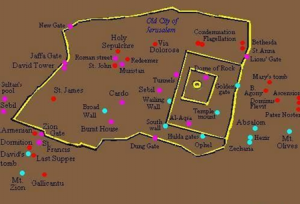 It is an outline of the old city of Jerusalem. The hexagon is the location of the Temple which the Merovingian sits in front of … “playing God.”

Expect ‘Merv’ to play a significant role in the 4th Matrix movie. This will have relevance to the map of Jerusalem, which is itself a reference to the Matrix, as it represents our own physical world and location of “Jerusalem below.”

The serpent (as with everything else) requires rectification. In its case, this is called tikkun ha nachash. It will only come after a final battle over the world he seeks to dominate, as he is in direct conflict with a power greater than himself, that has a ‘similar’ interest.

Said the Holy One blessed be He: I will not enter the upper Jerusalem until I will enter the lower Jerusalem.
Taanit 5a