The Architect: Father of the Matrix

A lot of fans found the character of the Architect (played by Helmut Bakaitis) a bit ‘boring.’ As mentioned in our Oracle profile, he is a very “one-dimensional” figure – sitting back in his big chair surrounded by monitors. (More on that in a bit!) He also comes off as uncaring, even mean-spirited, especially when compared to his counterpart, the Oracle.

Is the Architect ‘God’ in the Story?

The Architect identifies himself as both the creator and ‘father’ of the Matrix and the Oracle as the ‘mother.’ The idea of God the Creator being called ‘father’ is found in several spiritual traditions.

In kabbalah, God is referred to by way of various personae, each related to how He deals with creation. This goes back to the text of Genesis 1:27, which refers to the “image of God” being both ‘male’ and ‘female’:

Thus, we see the foundation for both a ‘father’ and ‘mother’ aspect to God the Creator, in the first chapter of the Bible.

So who is ‘God’ here? The Architect? Both he and the Oracle? Neither?

A deficiency with the Architect (as both he and the Oracle relate) is that he cannot deal with the diversity of human nature. This requires aspects of judgment and differentiation. These are functions of the left side of constriction, which is the domain of Understanding/Binah associated with the Oracle, the mother of the Matrix, as we discussed on her page.

As the concept of ‘choice’ emanates from the left-side attributes (i.e., exercising Judgment/Gevurah), the architect, functioning from the right side, does not have the capacity to comprehend all of the elements involved.

The Oracle explained this to Neo, in The Matrix Revolutions, the Architect does not ‘understand’ which is the aspect of Binah that presents ‘choice’:

You and I may not be able to see beyond our own choices, but that man can’t see past any choices … He doesn’t understand them – he can’t. To him they are variables in an equation. One at a time each variable must be solved and countered. That’s his purpose: to balance an equation.

Subsequent to his unsuccessful efforts at creating a functional Matrix, he was able to move forward with the help of the Oracle program, as she had the attributes related to ‘understanding’ that he lacked.  The two of them worked together as co-creators – “male and female” in building the Matrix.

The Architect as Wisdom 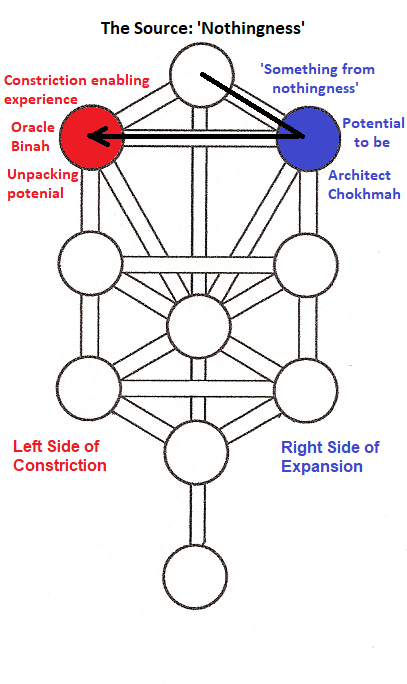 As mentioned in our Introductory material, on the “Tree of Life” diagram, Wisdom (Chokhmah) is atop of the right side, and Understanding (Binah) above the left.

The right side column is considered that of ‘force’ or ‘expansion’ and designated as ‘masculine.’ Thus we have the ‘father’ concept.

The left side relates to ‘form’ or ‘constriction,’ and is called ‘feminine,’ and the ‘mother’ concept.

This masculine-feminine dynamic is rooted in Genesis 1:27. The “Image of God,” that we are “created in,” is the force/form, “masculine/feminine” binary foundation of existence.

Reminder: These designations have nothing to do with gender and are only applied this way when considering the function of spiritual emanations.

The two emanations of Chokmah and Binah are considered as ‘one’ in how they function. There is not one without the other. The Architect requires the Oracle, just as she does him.

A Different Definition of Wisdom

In kabbalistic literature, Wisdom is not defined as experience or knowledge. It is the idea of a point, within which everything ‘exists’ before entering ‘creation.’

It is through Binah that all will later come into creation.

As stated in a commentary on the Zohar:

The Zohar breaks up the word chochmah itself into two words, koach, and mah. Koach means “potential,” and “mah” means “what is.” Thus, chochmah means, “the potential of what is,” or, “the potential to be.”
Zohar Selections translated and annotated by Moshe Miller

(Regarding this aspect of Wisdom, see our article on the ‘Potentials‘ in the Oracle’s apartment.)

So everything exists in potential within the Architect/Chokhmah at some point. A logical question to ask would be, Where did Wisdom/Chokhmah itself come from? What was ‘before’ that?

The point of wisdom is considered as, “being from nothingness” (Yesh me-ayin). This is comparable to the idea of the ‘big bang’ in science. The explosion/bang (=Binah) came from this single point (=Chokhmah) that contained everything in it.

This all relates to the Path of the One in the Matrix. Note that when Neo goes to meet the Architect, the door of light that he must go through becomes a single point that he himself passes into. We expand this in greater detail in our article on the door of light.

We don’t know what “came before” that point, however.

This is the kabbalistic understanding of this verse:

Job 28:12 – Wisdom comes into being from nothingness (V’chokhmah me ayin.)

In a similar way, no one really knows what the Source is among the Matrix characters.

This prompts some questions:

If the Architect is Not God in the Story – What is?

In our introductory material on the sefirot, we discussed the role of the uppermost attribute of Keter/Crown. This emanation is “above” all the other nine. The latter are associated with parts of the human body, whereas a crown is not part of the body. That’s a clue.

Keter is associated with the unknowable – the world of pure  ‘singularity’ beyond existence. In kabbalah it is called “pre-existence” or the “essence of existence.”

In the Matrix, the entity that is outside the existence of the Matrix and program worlds is the Source. It is the ‘creator’ of the creator program, the Architect. He represents the idea of the immanent aspect of God within existence that we can relate to. The Source is the unknowable transcendent concept of God.

No programs or humans know anything in detail about the Source – they only have a vague idea that there is something beyond. All attempts to identify what the source ‘is’ are incorrect – even those expressed by the Oracle and Architect.

As the Source is outside of their existence, it is effectively ‘nothingness’ to everyone. It is “no thing” in the same manner as the transcendent aspect of God is.

For an excellent kabbalistic lesson on the idea of the “creator being created,” watch this 3-minute video by Professor Daniel Matt.

Let’s Go Down a Rabbit Hole

Now that we’re warmed up a bit … It may seem illogical to think of the “singular point” of Chokmah as ‘expansive,’ while considering Binah as constrictive – when it’s the expansion of that point.

As we mentioned, these two emanations require one another – not only in how they function but in how we are to understand them.

The first thing to consider is that Chokmah is the ultimate expansive force. It takes us from the idea of the unknowable absolute ‘singularity’ (of Keter and pre-existence) and gives us an orientation point that we can relate to. That’s the biggest jump there is – we are going from 0 to 1. From nothing to something.

Within this finite point of Chokhmah, are contained all the possibilities we can know. Thus, Chokhmah acts as an expansion for us – yet (‘ironically’) it was caused by the above restriction/constriction.

The term for this restriction is ‘tsimtsum.’  This was the very first ‘action’ coming ‘from’ the transcendent aspect of God before anything existed.  Tsimtsum is key to understanding the Matrix story.

Conversely, although Binah looks like ‘expansion,’ in reality it’s a constrictive force. This is because we can’t experience every aspect of something (hidden in the point of Chokhmah) at once. Binah enables us to have a relationship to an infinite concept in knowable ways.

It’s A Small World After All

Thinking back to the Worlds of Existence, with each level of descent, we’re moving further away from the Creator/source, where it’s harder to “realize God.” Each level is caused by a ‘tsimtsum’ of the one before it.

As we discuss in several articles, each of the Matrix movies has a primary relationship with one of these worlds of existence.

Following the path of the One, in a return to the Source:

On that last note, a fourth film should correlate to the fourth world (from the ‘bottom’) which is called ‘Atzilut’ meaning ‘nearness’ (to the Source!) This is a world of unification, and collective consciousness, where the concepts relating to the Architect are dominant.

The Oracle: Understanding and The Mother of the MatrixArticles, Character Profiles, Oracle

Smith: Not So Bad After All? Could This Be True?Articles, Character Profiles, Smith