Persephone (played by Monica Bellucci), as with other ‘minor’ characters in the Matrix trilogy, represents a particular spiritual concept. Hers plays an important role in why she goes behind her husband’s back to bring Neo, Morpheus and Trinity to the Keymaker.

Persephone and the Merovingian are a ‘corrupted’ version of the divine “bride and groom” concept. As the Merovingian was “once like Neo,” Persephone relates to Trinity, even to the point of the kiss she shares with Neo, to get a sense of what might have been.

As with everything in the Matrix story, the scene with her kissing Neo has deep meaning. Persephone is keenly aware of the potential of love and what the kiss means.

Unfortunately, it seems both her and her husband’s egos ran amuck as they utilized their powers for their own sensual desires.

The path to the Source is one of complete selflessness, which is the reason why they and others failed. 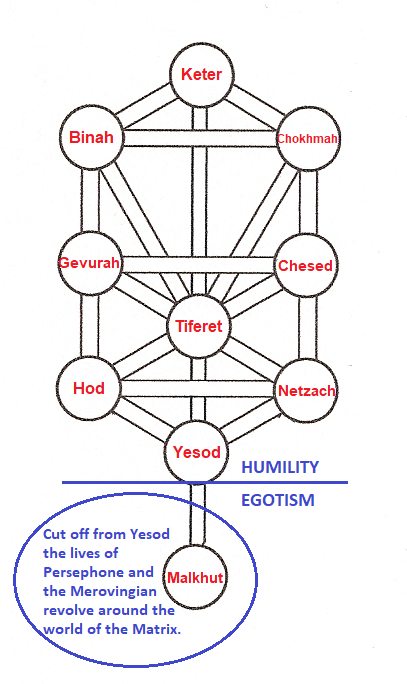 A key concept behind the Matrix, from the kabbalistic perspective, is that everyone and everything in the story is working toward the same purpose – whether they are aware of it or not.

Ultimately, some ‘good’ will come from everyone. Even Smith, at end of The Matrix Revolutions, served to create a unity that caused a change to the Matrix reality – one that will directly lead to the fulfillment of the Matrix prophecy in The Matrix Resurrections.

With regard to Persephone, we can see that she has some ‘redemptive’ qualities. After all, she did provide access to the Keymaker, who played a critical role along the path of the One.

As Persephone corresponds to Trinity, she also relates to the final sefirah of Malkhut/Kingdom, the last of the ten emanations.

As discussed in earlier articles, all of the energy from ‘above’ (the Source at Keter/Crown) that descends, “pours into it.” Malkhut, which relates to the Matrix world, functions in a purely ‘receptive’ manner regarding the path of this flow.

How humanity responds to this energy can be ‘positive’ (toward the goal of returning to the Source) or ‘negative’ (countering that). As Malkhut was designed for the purpose of restoring balance, it has its limits regarding how much of the latter it can sustain.

Thus, with regard to Persephone, even she can only ‘tolerate’ so much of the Merovingian’s behaviors. When she becomes ‘full’ of this negativity, the attribute of gevurah/judgment within her strengthens against the Merovingian.

In her own way, she ‘unbalances the equation’ (as the Oracle called it) within their relationship by ‘betraying’ him.

In this way, Persephone serves as an example of what can occur on a grand scale with humanity. If the latter continues in self-centered, hedonistic ways like the Merovingian, they will provoke a reaction that will intensify the difficulty of the Matrix existence.

Her similarity to Trinity, and her understanding of the shared concept of their ‘limits,’ are summed up in her one line from The Matrix Revolutions movie:

Persephone: She’ll do it. If she has to, she’ll kill every one of us. She’s in love.

As with Trinity, the receptive aspect of Malkhut is able to attain insight from all that came from above. Persephone understands how powerful the aspect of love is. Not just the love between two people but something far greater.

We discuss this in further detail in our profile on Sati, another feminine character related to Malkhut, whom we have not seen the last of.

Cypher: The Aspect of Doubt in the MatrixArticles, Character Profiles, Cypher