We saved the best for last. Sati (played by Tanveer K. Atwal) is the mysterious little girl who met Neo in the train station scene. We’re told that Sati’s parents sent her into the Matrix to hide, as she had no purpose and was facing deletion. She later appears in the Oracle’s kitchen baking cookies, then gets taken over by Smith, like everybody else.

Is that all there is to Sati?

As with many Matrix concepts, a lot of time has been spent “looking on the outside and not the inside” to figure her out. Not only is there much more to the character of Sati, but she will also be a central figure to the story when The Matrix Resurrections movie comes out – albeit an older version of her.

First, however, we present some additional insight on the Matrix world that the humans ended up in.

We mentioned in one of our Introductory articles, that the emanation of Malkhut (‘kingdom’) relates to both our “physical reality” as well as the “spiritual presence” within it. The latter manifests in different ways, which in turn are associated with certain divine ‘personae.’

One of these is the “divine bride” figure, which we saw in Trinity and her relationship to the “divine groom” – Neo.

The other persona related to Malkhut is that of the”divine daughter,” who is exiled into our world – with a purpose.

It is no coincidence that Sati was introduced as “daughter” by Rama Kandra and that she was also called “the last exile,” by Agent Smith.

Though her father explained that she was entering the Matrix to save her (as she had no ‘purpose), we will learn that this is not the case.  Not that Rama Kandra lied. He simply may not have been aware. Recall, he told Neo, that he knew “only what he needed to know.”

In kabbalah, the daughter figure has more of a bond to the people as she is in exile with them. Through her ‘connection’ to the higher realms she came from, their actions can cause major changes to reality. If people continue to fall further into destructive self-serving behaviors, the emanation of Malkhut (which relates to our physical world – and the Matrix world) becomes ‘corrupted’ by the negative impact of these actions.

The Problem With Malkhut (the Matrix World)

As mentioned earlier, Malkhut has a unique property in that it is completely ‘receptive.’ Looking at the Tree of Life diagram (below) shows why. Everything flows ‘downward’ and pours into Malkhut – the ‘final stop.”

If what flows is positive (love, generosity, selflessness, humility, etc.) then Malkhut (and our world) functions well. At some point, there isn’t even a need for the ‘exile.’

However, if what is ‘deposited’ into this final emanation is continually negative (hate, greed, envy, arrogance, etc.) Malkhut will reach a point of being ‘full’ of such things.

An ancient kabbalistic text explains this concept as follows:

“Know that this attribute (Malkhut), because it receives energy from higher powers (once received) has various qualities; to give life, or bring death, to bring up or bring down, to smite or to cure. All, however, is dependent upon the kind of energy that can be drawn to this attribute. It acts among all Creation according to the energy it receives … There are, however, other times when people transgress and the channels of judgment obstruct the channels of loving-kindness and mercy, causing much stress to be drawn into the world. The world, at that time, knows much suffering and want, and it is fraught with diseases and plagues.”
Sha’are Orah (“Gates of Light”), Joseph Gikatilla, 12th century 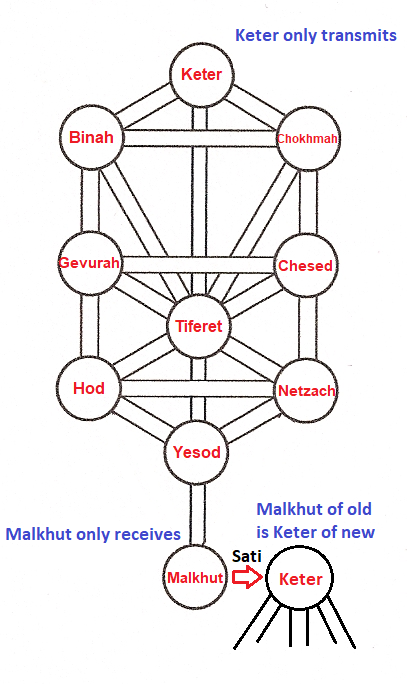 If nothing is done to change the “negative flow” into Malkhut, it eventually “flips a reset button.” This leads to complete destruction of the corrupted world and creation of a new world/system.

As the Architect revealed, this cycle is said to have occurred several times in the Matrix.

“… this will be the sixth time we have destroyed it, and we have become exceedingly efficient at it.”

By destroying itself, and initiating a new reality, Malkhut (the end) ‘becomes’ the Keter (crown), the beginning of a new world. It has ‘transformed’ itself from being only a ‘receiver’ to also being the top ‘transmitter.’

Getting back to Sati. She was brought down from the Program world into the Matrix, in a ‘concealed’ manner, through a deal with the Merovingian.

Remembering how he described his role:

With regard to entities moving from one world of existence to another,” the Merovingian has control:

Rama Kandra: I know that if you want to take something from our world into your world that does not belong there, you must go to the Frenchman.

Time for a leading question …

Should the Merovingian be concerned that some little girl is being brought into the Matrix from the Program world?

The answer is found in what the Oracle said about the Architect, and “not seeing past choices you don’t understand.”

Sneaking Sally Through the Alley

Certain characters in the Matrix relate to the negative forces (called the Sitra Achra/”other side”) in various ways. This especially includes Agent Smith and the Merovingian. As we’ve alluded to, they are not “bad guys” in a traditional sense. They are “here to do, what they are here to do,” as the Oracle would say. And in this case, the Merovingian, who ultimately controls the “train station” has a peculiar role.

There is a kabbalistic concept that says that when a soul comes into the physical world, it first passes by the Sitra Achra, which “examines it” to determine if it will amount to much good, or evil, or something in-between. If this soul is seen as having the potential to do great good, these negative forces will do something to prevent it from accomplishing its task. It may even use a physical entity to try and kill the person. (i.e., the Biblical story of Pharoah murdering all the first-born – which Moses survived.)

Thus, there is a  need to get such “righteous souls” past the observation of the Sitra Achra. This is done by making the person (or their parents) appear to be “not so good” or “not very capable.”

The result of this is that the Sitra Achra sees no great potential in such a soul and ignores it. Call this an act of “divine trickery” if you will.

This 16th-century text associates that concept specifically with the idea of the figure called “the messiah,” though it applies to any righteous person on a “divine mission”:

The great souls that are part of the cycle of souls of Messiah [i.e. such as Abraham, or David] are born simpletons and sometimes even to evil people, with nothing apparently special, in the likeness of the verse, “with no beauty that we should desire it” (Isaiah 53:2). This is because the level of holiness of Messiah’s soul is so high, that in its cycle its holiness is concealed from the Klipot (i.e. the barriers that conceal the holy light). This is done through sins and problematic situations that are simply ruses to trick the Other-Side. The Impure Forces would think that since this Soul comes from a place that needs so much correction, it will cause the body to further sin; so it is concealed from them that it’s going to submit totally to God and manifest Godliness to the world.
Shaar haGilgulim (Gate of Reincarnations) ch. 38

Let’s examine this with regard to Sati:

Why Does Sati Matter?

Going back to the end of The Matrix Revolutions and the unfulfilled prophecy:

So what’s going on?

As we discuss in future posts, following the kabbalistic teachings on ‘redemption,’ there are three stages to the fulfillment of the Matrix prophecy. Neo’s work along “the path of the One,” was the first.

The Matrix Resurrections finds us in the second, ‘interim’ phase. This is the time for humans to develop a desire to return to how they should have been living before the wars with the machine world began.

As “bad habits are hard to break” (including some fighting to preserve the Matrix!) the people will need a “little help.” One who will not be so little anymore – even “ten feet tall.”

What will Sati’s role be in the final phase, in The Matrix Resurrections? We have multiple articles related to her in the Knowledge Base as well as in our new section of Resurrections-related articles, such as this one on Sati being key to the prophecy. There is much to explore all over the site – in the blogs too!

In the meantime, this 33-second clip from a cut scene to The Matrix Revolutions will give you a reason to continue reading the material on the Matrix4Humans website. The Oracle hints at the “Secret of Sati.”

The Keymaker: Doors Beyond Creation in the MatrixArticles, Character Profiles, Keymaker

The Battery: More Than a Matrix CoppertopArticles, Battery, The Matrix