The Door of Light is a Point of Light

Following the intriguing instructions from the Keymaker, regarding the ‘314’ second window, Neo enters a mysterious door of light and the hidden world of the Architect. There is a peculiar aspect to his passage, as the door constricts to a single point of light before the Architect appears.

This point of light directly relates to the concept of a “composite unity” represented by the Architect. It is not the perfect singularity of the Source. It is made up of identifiable aspects within one point, reflecting the Architect with his many video screens.

It also relates to his desire to solve equations into one happy answer, as the Oracle said of him.

Neo’s entrance into this point of light is coming from the direction heading from the Matrix ‘upward’ on his path toward the Source. This is the 4th world of existence for him; preceded by those from the Matrix, the program world and the Oracle.

If we were to look at that same point of light from “the Architect’s perspective, down toward the Matrix,” it reveals something very interesting.

We’ve Seen the Point Before

The Wachowskis cleverly snuck something significantly important into the beginning of The Matrix Reloaded, before you even got settled in your chair.

This same ‘white dot’ we see with the door of light appears in the very opening moments of the movie before any of the characters appear. Quite amazingly, the scene precisely shows us the worlds of existence in sequence, from the point of view of the Source in The Matrix.

What is remarkable is this text, which aligns precisely with what we are about to see — first from (attaining) the vantage point, then through the worlds:

The term ‘descended’ is employed because the one who sees the constellation enters the high place of light from which he receives the everflow of view and he returns downward and sees the whole constellation.
“Sha’are Orah” (Gates of Light) Yosef Gikatilla, 12th century

The Door of Light and Worlds of Existence

The movie clip below is from the beginning of The Matrix Reloaded. Follow the notes below as you watch it. We also offer the kabbalistic/Hebrew terms for the worlds of existence.

You may want to watch the video below a few times and compare to the notes above. This is a true hidden gem of understanding.

UPDATE: Another Door of Light!

The release of the trailer for The Matrix Resurrections reveals Neo “taking the plunge” through another door of light. (See image below.) Just as the door of light leading to the Architect was symbolic of the 4th world of existence along Neo’s path in The Matrix Reloaded, this door in the 4th film, corresponds precisely to the 4th level of the soul, that of collective consciousness, on Neo’s journey, as discussed in our early articles.

The Matrix story has yet to divert from the “kabbalistic script!” 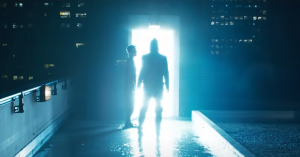 Neo’s Dream and Its Place in the MatrixArticles, Dreams, The Matrix Reloaded

The Kiss: Awakening Love in the MatrixArticles, Kiss, The Matrix