Hamann – a Spark of Wisdom

Hamaan (played by Anthony Zerbe) dominant attributes are mostly from the ‘expansive’ right side of the Tree of Life. Note how he ‘proactively’ engages with Neo when they meet, with his open-ended questions. This behavior reflects the attributes of Chesed and Netzach which approach things from the right side which has no ‘limitation’ – the side of “belief/faith”:

“Of course not, how could they? The idea’s pure nonsense, but… it does make one wonder just… what is control?” 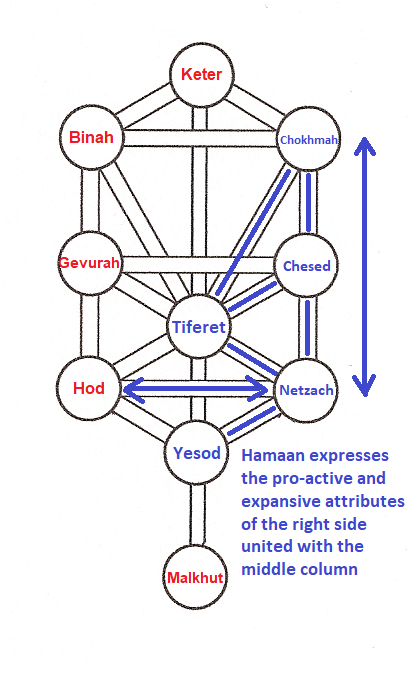 Hamann has the title of ‘councillor,’ but with those questions, he is acting as a ‘counselor,’ attempting to get Neo to open up to expand his consciousness.

What makes him successful is that his dominant attribute is connected to others and not operating in isolation.

His comments reflect “belief/faith” which emanates down from the singular reality of Chokmah and are in balance with Hod, which asks questions in search of truth and making appropriate connections to it.

(Compare this to the defects with the same attributes in Cypher, as discussed on his profile page.)

Hamann allows a ship to search for Neo, based on his ‘belief,’ upsetting Commander Lock whose ‘understanding’ remains disconnected from the central “path of the One.”

Lock: Then why did you allow the Nebuchadnezzar to leave?
Councillor Hamann: Because I believe our survival depends on more than how many ships we have.

His discussion with Neo reflects a state of humility that connects with him. In kabbalah, ‘humility’ (‘anavah’) is a state of, “realizing exactly where one stands.” It is a key quality of the central path of balance. (The Merovingian, with his ego problem, is an example of one lacking this quality.)

Hamann shows humility in his seeking understanding for himself and others. Again, compare his words he spoke to Neo, grounded in belief, to those of Commander Lock who resigned himself to “not understanding”:

“I have absolutely no idea how you are able to do some of the things you do, but I believe there’s a reason for that as well. I only hope we understand that reason before it’s too late.”

The idea of reaching a higher ‘understanding’ is the concept of moving toward the next ‘condition’ in life. Hamaan’s discussion with Neo, “plants the seed” for that.

For instance, going back to this statement:

This hints to the idea that these two “opposite powers” are connected. Indeed, Kabbalah teaches that “there is but one power” (“Ein od Milvado”) and everything that happens in our lives has a ‘singular’ purpose of moving us to our own source/Creator.

This is reflected in Morpheus’ statement, just before the elevator door opened, with Persephone standing there to help them:

“What happened, happened, and couldn’t have happened any other way.”

This is the essence behind the famous, “There is no spoon,” quote from the first movie.

Neo comes to understand this at the very end of The Matrix Revolutions.  He realizes Smith was not really his ‘enemy,’ but a means toward the eventual saving of humanity from the confines of the Matrix.

Neo: What are you afraid of?
Smith: It’s a trick!
Neo: You were right, Smith. You were always right. It was inevitable.

Of course, the question is; “What is ultimately inevitable?”

Bane: Descent and Ascent of Judgment in the MatrixArticles, Bane, Character Profiles