The Bane of Existence

First things first. That is Agent Smith in the image above. He is on his way to taking over the body of Bane (played by Ian Bliss) and entering into the flesh and blood world of the humans.

Later in The Matrix Revolutions, we have this interesting exchange between Bane/Smith and Neo:

There’s that word ‘inevitable’ again. Smith is right. It’s simply that “how he is right, he is wrong.” We explain that in a later article. Back to that dialogue. There are three key points to address.

Everything Smith says is only true to an extent:

Let’s recap some important correlations as this can get confusing when comparing “flesh and blood” humans in the Matrix to humans in the world that we ourselves live in.

Remembering these points will help:

Inevitable Is Not What Bane/Smith Thinks It Is 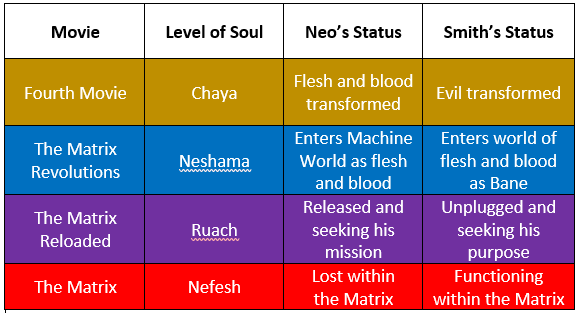 The ‘path’ Smith follows is one of ‘ascent,’ similar to Neo:

These three levels parallel the three lower worlds of existence that make up ‘creation.’  According to kabbalistic teachings, the incorrect actions of Adam and Eve gave access for evil to permeate those three worlds. They are since thus called, the three worlds of impurity. This is why Smith has access to all three, while Neo can go beyond, in order to bring repair to the same.

So while Smith is ‘correct’ in saying things were ‘inevitable,’ at the very end of The Matrix Revolutions he learns that, “how he was right, was wrong.” His ‘unplugging’ and becoming the ‘destroyer’ were “all part of the plan.”

Everything has to be ‘destroyed’ in order for the full and final repair to occur. Though we’re not at that point yet. As we explain, the “Matrix Prophecy” has more than one stage.

Continuing along with the kabbalistic framework and timeline of the trilogy, the fourth Matrix movie should involve two types of transformation:

UPDATE 9.12.21 – The fourth film will indeed be called “The Matrix Resurrections.” See the significance of the title and release date in this article.