All three Matrix movies begin with Neo in some type of sleep state. In the middle film, Matrix Reloaded, he is shown having a dream. What the concept of dreams means with relation to the framework of the Matrix and WHY Neo’s occur between the first and second movies is significant. There is a kabbalistic saying that “dreams are 1/60th of prophecy.” This expression has to do with the ‘realm’ of dreams which span the physical world (i.e., our brains and biological systems), and the ‘lower’ spiritual world, where we can experience a “connection to above.”

The Matrix Reloaded begins with Neo having a dream about Trinity involved in some action scenes. The dream ends with her jumping from a building and being shot by an agent. It is unclear if she dies.

This scene immediately shows us where Neo is on his spiritual journey. Kabbalah teaches that dreams span between our minds in the physical world, and the lower spiritual world, the latter being the world of angelic beings, such as in the dream of Jacob’s ladder. 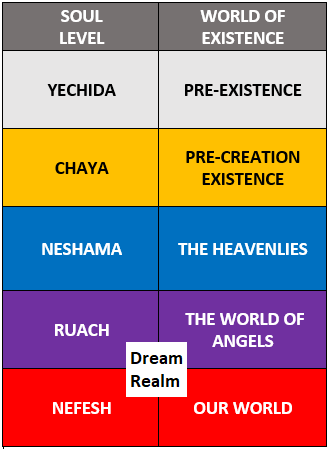 In Hebrew, the word for angels is, ‘malachim,’ (mala-keem) meaning ‘messengers.’ This gives us the idea here of messages “from beyond” being conveyed to us, as well as our own, “ascending upwards” to connect to such.

When a Dream is a Vision of the Future

As mentioned in our introductory articles, these two lowest worlds of existence relate to the soul levels of Nefesh and Ruach. (See bottom rows of the chart.)

Here at the beginning of The Matrix Reloaded, we’re at the point of Neo’s journey spanning between these two dimensions. This is why dreams play such a key role in the second movie.

Interestingly, it is Morpheus who helps Neo and others transition from the Matrix world to their path ‘outside’ of that. In Greek mythology, Morpheus is the god of dreams.

For Neo, these dreams turn out to be a view of the future. However, Neo is only seeing in part. There is something obscuring the complete vision.

Neo: I see Trinity, and something happens, something bad. She starts to fall, and then I wake up.
The Oracle: Do you see her die?
Neo: No.

A clearer vision for Neo will come as he rectifies this second dimension of his soul through the Matrix Reloaded. There remain things obscuring the path he is seeking, that need to be dealt with.

Neo’s Advancement In the Matrix Reloaded

As discussed in our background files, the first movie was primarily about Neo beginning to understand the reality of the Matrix and his role as “the One.”

At this stage of the story, Neo has rectified his soul level of Nefesh. He has attained a level of understanding of the Matrix world – the lowest world of creation – that of time and space.

The Oracle expresses this when she continues their conversation in The Matrix Reloaded by stating:

You have the sight now, Neo. You are looking at the world without time.

Neo gets his first diploma. However, he is only at the beginning of working on this next level of his soul.

This is revealed in this manner:

Neo: Then why can’t I see what happens to her?
The Oracle: We can never see past the choices we don’t understand.

Again, the Oracle speaks in a manner that gets Neo to think in a new way.

This ‘understanding,’ that Neo requires, will come at the third soul level of the Neshama, which happens in The Matrix Revolutions. This level relates to the world of the Oracle, the ‘mother.’

The ‘Ladder’ Can be a Difficult Climb

The soul dimension of Ruach lies between the self-serving Nefesh (which Neo has overcome in the first movie) and the Neshama with its connection that leads to the Source (which Neo attains in the third movie).

Ruach is the “in-between” level where we struggle to make spiritual connections. We question, discover, doubt, and often take steps both forward and backward. Some never progress. Others even fall backward (Cypher).

As far as Neo goes, he has fulfilled one level of his mission, but now struggles with understanding his greater purpose. These battles, both external and internal, are part of the process of rectification. Ultimately, they are all for the good.

At every level, in each movie, Neo has an encounter with the Oracle, who tells him “what he needs to hear.” She initiates ‘tsimtsum,’ the process of “creating space” for the next level of understanding that he requires.

This is how she explains this second part of his journey:

“Because you didn’t come here to make the choice, you’ve already made it. You’re here to try to understand why you made it. I thought you’d have figured that out by now.”

Remembering that the concept of ‘understanding’ relates to the Oracle and the soul level of Neshama, a way to paraphrase the above would be:

Lastly, one can’t help but make a comparison between these two statements.

When the LORD brought back Zion’s exiles, we were like dreamers.
Psalm 126:1

Zion, exile and dreams in one verse. Sounds very ‘Matrixy’ doesn’t it?

Matrix Programs and Their HierarchyArticles, Programs, The Matrix Reloaded