I received an email with the following question about choice and causality:

“You and the Merovingian had a very strong disagreement. He advocated for causality and you said everything begins with choice. Can you explain both views and why you think you are right?

Do you remember the scene in Matrix Revolutions where we left the Merovingian’s restaurant? In the elevator, I told Neo and Trinity, “what happened happened and couldn’t have happened any other way.” Then the door opened and Persephone was there to lead us to the Keymaker.

At that moment I was sure that our choices had brought us exactly to where we needed to be. Looking back, I would say what I believed was correct, but HOW I believed it was not entirely so.

Allow me to explain.

At that time, I had no idea how profoundly that my perspective was about to be challenged.

When Neo returned from his being held hostage, he informed us that he had met someone (the Architect) who told him Zion was to be destroyed. He now believed that the prophecy was a lie. 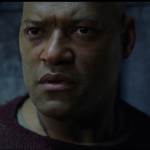 Again, I believed we had made the right choices. Yet there we were, looking at our inevitable doom. In that moment, I could not find an answer to answer Neo’s argument. My choices had brought me to a conclusion that made no sense. Do you recall the look on my face? If not, there I was – dumbfounded.

That was a very humbling experience for me. But if there’s one thing I’ve learned, it’s that every dose of humility opens a new door for you. In fact, it’s required in order to advance on the path.

Which brings us to my little chat with the Merovingian. First, I want us to visit understand his viewpoint.

In our argument, he said, “choice is an illusion, created between those with power, and those without.”

There’s truth to that – to a degree. To him, everything was a “manipulation of forces,” between the worlds of the Matrix and programs.

I imagine this relates to his not meeting his own potential. As Persephone said, he was like Neo once. His doubt and failure led to him entering a mode of survival. This eventually inflated his ego, and led to his insatiable desire for power and possessions.

The result of all this is that his energy began to revolve around itself, disconnected from the path of the One – the truth. Everything was reduced to what he considered an inescapable system of cause and effect.

What helped form my perspective, was the access I had to the Oracle, and her understanding of the Source. Causality has its role. It becomes a vice grip on our consciousness if we don’t recognize the higher purpose of what the Source really is – the reality that existed before both the Matrix and the program worlds.

Everything has some element of the Source within it and with regard to humans, that includes our purpose – to correct the fracture in creation that we’ve caused.

At the level of the source, it is not about choice and causality. Rather, it is the force of cohesion that brings everything together to the ultimate good.

Neo understood this at the very end of Matrix Revolutions. We all can. And we all will in The Matrix Resurrections.

Desert of the Real with Morpheus 1.2 – Comparative ViewsBlog Morpheus

Desert of the Real with Morpheus 1.4 – Did Neo Fail?Blog Morpheus