Tikkun: Repair – The Purpose of the One

With this article, we begin to look at more complex concepts found in the Matrix trilogy. Some of these are introduced by the Hebrew terms as found in kabbalistic texts.

The Matrix movies are built on these two models. They relate to the repair of Neo on a soul level, as well as to the human and machine worlds – something that will occur in the next movie.

In the prehistory of The Matrix, the humans and machines once had a balance in their co-existence. That harmony became distorted and they fell into an antagonistic relationship. (See “back story” below.)

This distorted symbiotic association was alluded to by Councilor Hamann in his conversation with Neo:

What is this Tikkun that Neo is Chosen For?

This is what we are told by Morpheus, regarding the world preceding the Matrix:

We have only bits and pieces of information but what we know for certain is that at some point in the early twenty-first century all of mankind was united in celebration. We marveled at our own magnificence as we gave birth to AI (artificial intelligence) … We don’t know who struck first, us or them. But we do know it was us that scorched the sky.

NOTE: There is a “back story” to the Matrix, that mentions how humans first enslaved the machines they had created. The machines revolted and ended up in economic competition with the humans, soon dominating. The humans resorted to destroying the machines, which failed and ended up with their enslavement in the Matrix world. You could say that the humans were enslaved by their materialism, and in a sense, for “playing God.”

The bottom line to the Matrix story is that things are not as they were meant to be, and need fixing. This sounds simplistic but it attests to an important distinction. The true ‘goal’ is not the destruction of the machine world, but rather, effecting tikkun/repair that leads to the end of the Matrix, and returns things to proper balance.

Tikkun may be accomplished by any of the characters on a personal level. That’s another hidden concept – the Matrix world, despite it being a world of ‘concealment,’ provides the ‘opportunity’ for humans to make corrections and advance.

To effect repair on a major scale however, requires someone both highly capable and having the right ‘intention.’ This is the concept of the righteous person (called a ‘tzaddik,’ plural: tzaddikim) and is the foundation behind the concept of “the One.”

(Note: This article further develops concepts introduced earlier in the Knowledge Base.) 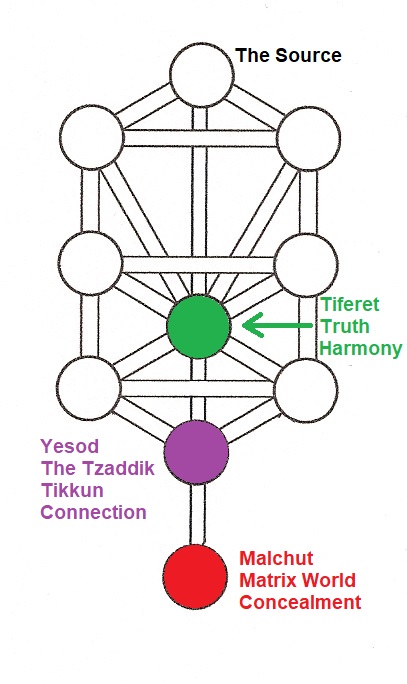 The Tzaddik as the Conduit for Repair

The function of such a powerful, righteous person (a ‘tzaddik’) as the conduit of repair, revolves around the emanation of Yesod, which means ‘foundation.’

Note the position of Yesod on the Tree of Life diagram. It resides above Makhut (where we find our physical world) and below all the rest of the emanations above.

(This can also be seen as Yesod connecting Malkhut, the bride, to Tiferet, which represents the ‘king’ and stands in as ‘groom’ for the six masculine emanations, as discussed.)

Thus everything coming into, or rising out of Malchut (our world/the Matrix world), passes through Yesod.

If Yesod is functioning well, the world below receives sustenance from above. If there’s something wrong at the junction of Yesod, then Malkhut is “cut off” from everything (good) above.

This is understood as providing a ‘foundation’ to the world, as mentioned in the following text (which we will quote from several times in this section):

“As is taught: “For the world at large exists and subsists by virtue of these tzaddikim, as it is said, ‘The tzaddik is the foundation of the world’.” – Proverbs 10:25″
“Chassidic Dimensions” Jacob Schochet

Neo’s Repair In and Out of the Matrix

The conflict that most humans feel between the living in the physical and connecting with the spiritual, is actually a strength in the tzaddik. In such a person, the two work together in making the connection between those worlds.

This is reflected in Neo’s growth, culminating in his connecting the Matrix world to what is beyond it. He is thus connecting “earth and the heavens.”

We’ve added some Matrix connections (in parentheses) to the text we continue to quote, to illustrate the point:

“The tzaddik (the One, as well as someone like Morpheus) is essentially a spiritual person (freed from the Matrix) … The tzaddik is thus joined to the spiritual reality (reality outside of the Matrix). On the other hand he is also a soul in a body living in this physical world, (within the Matrix) which joins him to the earth as well. In that sense then, the tzaddik becomes an intermediary, the common denominator that is able to join the physical and the spiritual (the Matrix and reality outside of it) the heaven and the earth He is the channel (the Path of the One) by means of which heaven and earth can relate to one another, the means by which Divine emanations are channeled to the world. Thus he becomes and is the foundation. He binds all worlds (Matrix, Programs, Machine/Human) together. All emanations that flow from one world to the other, even from the most high, (the Source) go through the tzaddik.”
“Chassidic Dimensions” Jacob Schochet

That last point of flowing, “even from the most high,” is extremely pertinent to Neo connecting to the Source in The Matrix Revolutions. Only the highest level of tzaddikim can do this.

Tikkun and an Escape for the People

As discussed, Morpheus is also a tzaddik and the door for many who were freed. However, it is Neo, who ultimately opens the higher path for others to ascend from the bondage of the Matrix world.

Returning to the same text:

“Even as the tzaddik is the path for Divine influences to the world in general, so he is also an intermediary for the people of his generation to ascend to Divinity.”
“Chassidic Dimensions” Jacob Schochet

This is something only partly fulfilled, as mentioned in the dialogue between the Oracle and Architect, at the end of The Matrix Revolutions. Neo has paved the way, but the rest of the humans still have their own work to do to follow him into what the future holds.

The Tzaddik who reaches Chokmah/Wisdom

As discussed in our introductory article, each ‘soul cycle’ of Neo’s path takes him to/through the level of Chokhmah/Wisdom. This is followed by the opportunity to experience total ‘self-negation’ (bittul),  and eventually bring a measure of repair/tikkun to the Matrix and Zion.

The tzaddik in this world, by virtue of having reached the level of chokmah/wisdom (4th soul level) and self-negation (5th soul level), thus becoming attached to the supernal wisdom – becomes the intermediary through which the Heavenly abundance comes to this world when he himself exists.”
“Chassidic Dimensions” Jacob Schochet

The Tzaddik: Connection between the Source and the Humans

In the dramatic final scene in The Matrix Revolutions, we see the physical Neo bound to what is in the script called, the “Deus ex Machina” – the “god from the machine.”

He then becomes the connection between this ‘god’ and all of the Matrix:

This is the tzaddik who is able to join and bind together all worlds. As he himself is bound up with God on the one hand, and with the worlds on the other, he joins them all to Divinity. Thus he is the intermediary between them, the channel or funnel that serves as the passageway in both directions.
“Chassidic Dimensions” Jacob Schochet

Note the reference to “both directions” which is the capacity of Yesod, as mentioned above. Anything “going up or down” the path, passes through Yesod/the tzaddik.

Though several characters are in the role of the tzaddik through the movies, Neo attains the highest level. He is able to elevate many from the Matrix and bring things back toward the proper state of ‘wholeness.’  This is the more precise definition of “Shalom” (peace) which is a descriptive term for the emanation of Yesod in kabbalistic writings.

Deus Ex Machina: What do you want?
Neo: Peace.

More to Come in The Matrix: Resurrections

Despite, an end to the immediate violence, a true ‘peace’ has not been reached. There is no state of real wholeness (shalom). The ‘prophecy’ has in no way been fulfilled as the Matrix still exists and the humans are not all free.

Viewing the current situation as ‘failure’ however, would be limited thinking. Everything accomplished by Neo was part of a sequence of events. (See article on The Revealed Path of the One.)

Neo has paved the way and “gone ahead” to initiate the final steps of “Tikkun Olam” (repair of the world) in the Matrix story.

Teshuvah: Return to the Source and SelfArticles, Neo, Oracle